Gulfway Pawnshop provides a bit of everything in unknown times 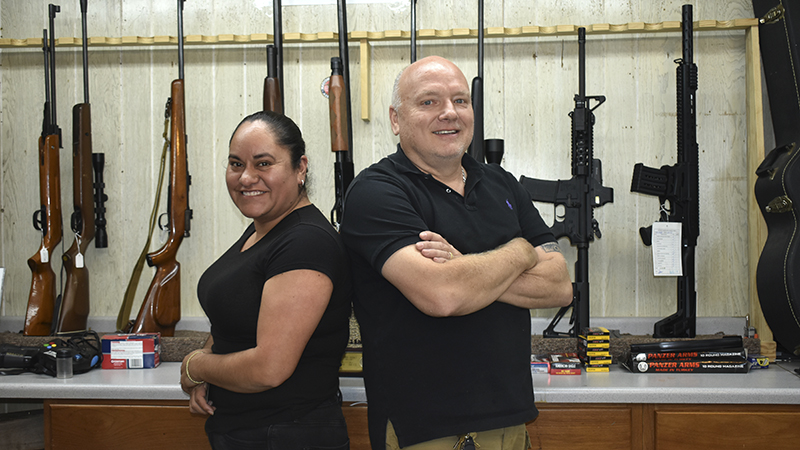 Maria and John Rabalais, owners of Gulfway Pawnshop at 3434 Gulfway Drive, have seen an increase in business since they took ownership last year. (Mary Meaux/The News)

The owners of Gulfway Pawnshop, John and Maria Rabalais, fit comfortably into a business that has a little of everything.

The couple bought the business in March 2019 after John decided to move to the private sector after 20 years of work in the public sector.

On a recent day John opened one of the counters and brought out a brand new industrial tensioner, while next to that item were brand new No. 9 Klein scaffold builders pliers. Those items are typically a must-have for people in the industrial field. The shop sells used and new tools, firearms and jewelry along with a number of other items.

The pawnshop serves the neighboring community.

“We are this immediate area’s bank,” John said. “People come in and pawn the same thing every time. They know the amount and go across the street (to H-E-B) for groceries and come back next month and pay me off.”

Maria explains they both speak Spanish, yet many Spanish-speaking customers tend to gravitate toward her, possibly because it makes them feel like they’re at home.

The pawnshop business increased approximately 23 percent over the year that the Rabalais have operated it, something they attribute to treating people the way they want to be treated.

COVID-19 has led to some changes, but the business is essential in that it is a financial institution that also sells guns, which Texas Attorney General Ken Paxton said is an essential business, as well.

A buzzer operated by Maria or John opens the door for customers — a safety feature, and is also used when a customer exits. Because it is a pawnshop, there are rarely 10 people inside the business at one time, which follows the county’s emergency order and allows customers to observe social distancing, John said.

There is a note in the front window spelling out the precautions being taken in light of COVID-19. Plus, he said, the counters, keypads and door handles are all cleaned multiple times per day.

When the area began experiencing the first signs of coronavirus, people rushed to buy firearms and ammunition. Gulfway Pawnshop was one of the locations where people shopped.

“Everybody rushed in to buy firearms and ammo and it overloaded the FBI system (which performs background checks),” he said. This meant the pertinent information delayed in some instances.”

For example, one pending purchase made March 20 was approved 12 days later. Then again, if the buyer has a concealed handgun permit, they have already went through a background check and can purchase the weapon on site.

When Rabalais bought the business there was no guns, so he began to stock up. That also meant no ammo so he took on that issue as well.

As he spoke recently a customer came in and found a good deal on an Israel made, Baby Eagle .40 caliber gun. Rabalais spouted statistics on the weapon without a pause as his customer looked over the weapon. Of course Rabalais checked the chamber and clip to make sure the gun was safe before handing it over.

On a side note, Rabalais motioned to the Panzer AR12, or “zombie killer” as he called it, on the shelf. A laptop nearby plays a video, showing just what the firearm is capable of doing and is somewhat of an attention getter.