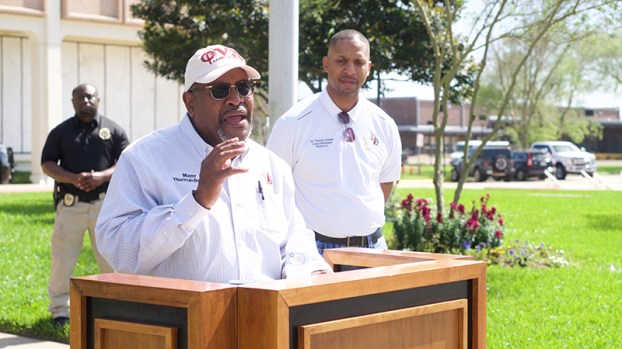 While not a “shelter-in-place” type declaration, the order follows the same lines as previous orders but addresses church and funeral services more clearly.

Churches and houses of worship are not allowed to, for example, have people in one section and others in a separate section as a way to abide by the social distancing rule.

That, Bartie said, is not in compliance.

What actually happens is the most susceptible people, those who attend church and are older, are possibly exposed. Those folks have a higher percentage of not surviving, he said.

Also not allowed are church services in parking lots because this, too, can lead to social interaction.

“Contact will be made, even if they don’t get out of the car,” he said, adding someone may need to use the restroom facilities, meaning someone will have to open the door to the church leading to another person inside a building.

Bartie asked, begged and pleaded with ministers of the Gospel to not put their parishioners in harm’s way just so they can say they had a church service. Likewise, he addressed his brothers and sisters of the Islamic faith not to have more than 10 people in the mosque at any given time.

We want to work toward compliance, not defiance, he said.

Houses of worship can hold virtual services and broadcast via whatever medium is available.

Bartie asked the funeral industry in the city not to hold funeral services or visitations in churches, but instead have them at the funeral home while taking into account the 10-person rule — three of which will be funeral directors.

“We are encouraging graveside services,” he said. “And are getting with the cemeteries and asking they honor the life of that individual this way.”

Stay home as much as possible

Residents are allowed to go to the grocery store, to the doctor’s office and to the pharmacy, but going out for the sake of going out is discouraged.

The Port Arthur Police Department has been asked to enforce this.

The city and county’s 24-hour juvenile curfew remains in place where any student 18 and under should not be out unless he or she going to a place of employment, is accompanied by a parent or accompanied by school personnel.

Containment of the virus is important. If a member of a household tests positive for the coronavirus, then the entire family will be quarantined for 14 days or until they are shown not to be infected, he said.

Bartie said the emergency order is for the betterment of the community and the safety of the citizens of Port Arthur.

Bartie announced there were three positive cases of coronavirus in Port Arthur. Two days ago, there were zero, and maybe “by this time next week we will have more,” he said.

He reported the individual from the first reported Port Arthur case is feeling much better but cold not elaborate further.