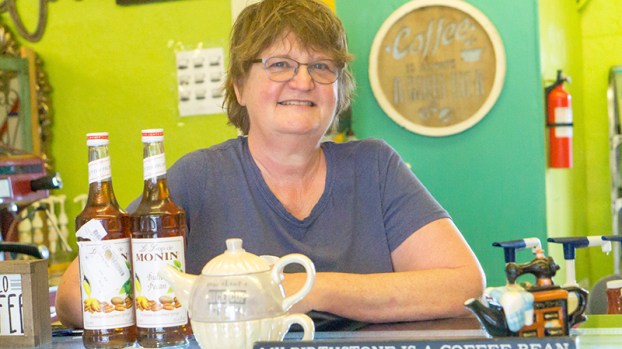 Cindy Kareutzer, co-owner of Sundara Coffee House and Grill, grins at the front counter as she prepares for the day. (Cassandra Jenkins/The News)

GROVES — Cindy and Herb Kareutzer own Sundara Coffee House and Grill on the corner of 39th and Lincoln Ave.

The husband-wife duo started working in the coffee business in 2014, operating their first coffee shop, Kizmet, which was later sold and transformed into the Groves Café.

Kismet in Indian means ‘fate,’ describing Cindy and Herb’s journey through the coffee world to a T. 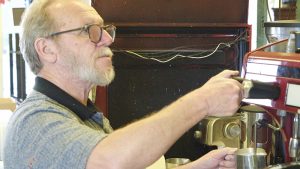 Deciding to run a coffee shop is also chalked up to destiny.

In 2014, Kathy Butaud, local owner of the town’s only coffee shop at the time, The Lazy Bean, approached the pair, asking them to join the business.

“Lazy Bean was going to move to the mall,” Cindy said. “We were right across the street, and (Kathy) asked us if we wanted to get into the coffee business, because Groves really needed one. At first we didn’t want to do it, but later we talked about it and decided we wanted to go ahead and do it.”

The Kareutzers operated Kizmet for a year before selling the business in 2015.

Cindy approached Herb one day, expressing her thoughts and desire to reopen a coffee shop in town.

“I said, ‘Let’s make it happen,’” Herb reiterated. “Eventually, we set up our coffee shop down the road on Lincoln Avenue, although we always wanted to have the shop in the spot by the art studio.”

“Maybe about four weeks after we started down the street, this place became available,” Herb said of the current location. “So we packed up and moved again. It’s been a bit of a journey, but this is much better because we have the art shop, the coffee shop and we had the space to convert into a kitchen.”

When pressed with deciding on a name for the new coffee house, Cindy and Herb again turned to the Indian dialect.

“Sundara means ‘right’ or ‘beautiful,’ depending on how you use it,” Cindy said. “Getting back into the coffee business was the ‘right’ thing to do at the time, hence the coffee house name.” 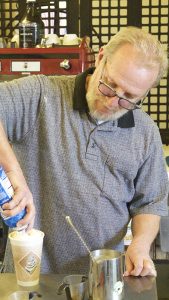 “We want people to feel welcome, to feel at home here,” Cindy said. “We want it to feel like a place where the community can come in, relax and get away from the world for a little while. Everyone needs that kind of bliss.”

The shining star of Sundara Coffee House is the one-of-a-kind blend.

“The coffee is our own blend,” Cindy said. “We looked through the coffees, the different notes and flavors and we took samples from different places. We had blends from all over the country and decided to mix and match until we got the flavor and the particular notes we were looking for. It’s incredible and you can’t get it anywhere else.”

“At first, it was just coffee,” Cindy said. “I wasn’t going to do food, but my natural progression was to go into the kitchen and we started slowly adding things to the menu. We try really hard to have things that are different, but not too far off the chart because people need a sense of comfort and familiarity.”

Reflecting back, Cindy said the decision to return to the coffee business was the right one and she absolutely loves the community that fate brought her to over 10 years ago.

Sundara Coffee House and Grill is operating by drive-thru, curbside and Favor delivery under the most recent Jefferson County Emergency Order.

“It takes strange times to force you to make changes and decisions you didn’t see coming,” Cindy said. “But we are open and more than happy to have people come in. Give us a try and say hello.”

Sundara Coffee House and Grill is open daily from 7 a.m. to 7 p.m. and can be found on Facebook.