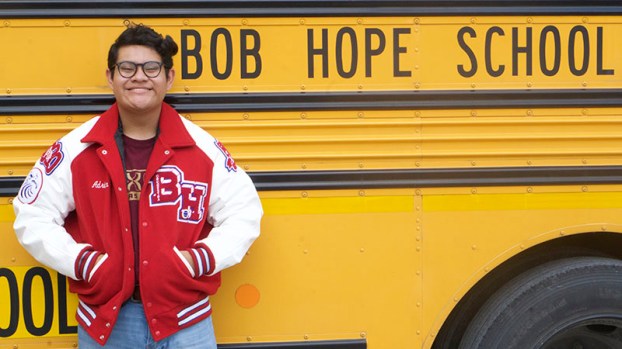 Adrian Medina is a native of Santa Ana, Calif., but has found a home in Port Arthur for the last seven years. In his travels, he has always carried one important aspect with him — his education.

Living in Southern California, Medina attended a charter school throughout his elementary education. He chose to continue that path by enrolling at Bob Hope.

“When I moved to Texas, to be closer to my mother and three brothers, it seemed only natural to attend another charter school,” he said. “Bob Hope helped me not only plant myself within the community, but provided me the friends and family I lacked when moving to Texas, along with providing great opportunities such as dual-enrollment and the ability to learn and play cello.”

“Playing the cello, it teaches me to challenge myself,” he said. “Not only through music, but everyday life. It also allows me to share my music with the community.”

Medina is a member of the Bob Hope orchestra, sergeant-in-arms for the Interact Club and vice president of the National Honor Society.

Algebra II teacher Ashley Fletcher is most proud of Medina’s open heart and selfless demeanor. She said he is organized and takes pride in his work.

“With his open heart, Adrian is always selfless in the opportunity to assist others in need,” Fletcher said. “His upbeat attitude is contagious and creates a positive and motivating learning environment. I believe he will quickly advance in a position that requires leadership.”

According to Fletcher, Medina is an example student and “genuine human being of society.”

Despite his on-campus leadership roles, Medina lists his most significant role as a counselor and dance instructor at Texas Governor’s School at Lamar University.

“These positions not only allowed me to help campers come out of their shells, but also gain the teaching experience I lacked, further driving my interest in teaching,” Medina said. 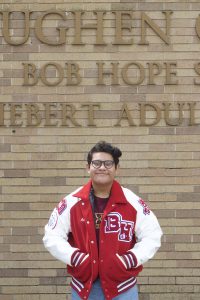 “As a young Chicano, I realize it is important to use education as a way to become a better leader and give back to the community,” he said. “At the same time, I set the example for younger generations to pursue education themselves.”

Medina plans on majoring in education to seek a certification in EC-6 (early childhood through sixth grade) teaching to work with children at the elementary level, a role he is practicing as a teacher’s assistant.

“Working at an elementary campus has given me the opportunity to further explore my interest in teaching,” he said. “Working with preschoolers has allowed me to gain knowledge on working with the younger children. It’s the reason I want to teach at an early-childhood level.”

Medina learned his love for education from his father and role model, Louis Medina.

“My father has always taken an active interest in my academic wellbeing, not only supporting me as an individual but encouraging other families as well,” he said. “I remember when I was struggling with multiplication in elementary school and my dad went out and bought the practice material we had at school so that I could work with them at home.”

Louis is the reason Adrian said his long-term goals include using teaching as an outlet to encourage more involvement between families and their children’s education.

“(My dad) has always been my biggest role model,” Medina said. “He raised me single handedly, and despite the struggles he still managed to support me through my education and many interests.”

Local elections beginning to be pushed back to November

Local entities are taking a second look at whether they should go ahead with the May 2 election, and at... read more