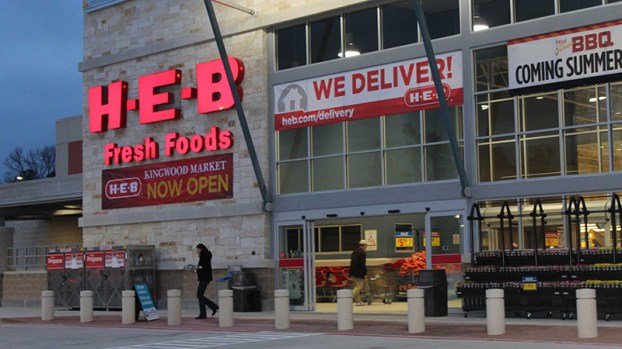 Officials continue to stress the importance of social distancing during the coronavirus pandemic, and while not everybody has taken that advice to heart, many have. Some local businesses have even put measures in place to enforce social distancing as much as possible.

H-E-B in Lake Jackson is one of those.

While store employees were not limiting the number of people who could be inside at one time, the flow of Saturday shoppers was directed in and out of a single entrance, while an employee stood outside of the closed entrance to let customers know it wasn’t being used.

Outside the open entrance, employees passed sanitized shopping carts to those who requested them. People walking into the store were directed to pass on one side of an employee standing in the entrance, while those exiting passed by her on the opposite side.

Walking into the store and at each checkout line, H-E-B had signs posted on the floors to prompt shoppers to stand several feet apart in observance of social distancing.

While customers shopped, employees inside the store worked to sanitize surfaces customers often come into contact with. Some employees wore latex gloves while working.

One Saturday shopper did the same.

“I wipe the basket down, but today I had rubber gloves, so I’m good,” Larry Gilpin of Brazoria said.

Gilpin usually does his shopping after work at 6:30 a.m. when the store is pretty empty, but has been unable to do that with H-E-B’s modified hours, he said.

“I’m just getting a few things that I need, and getting in and out as fast as I can,” Gilpin said.

In addition to wiping down the shopping carts or wearing gloves, Gilpin has been taking other precautions against catching or spreading the coronavirus, including washing his hands a lot and trying to avoid being around people, he said. His wife hasn’t left the house in two weeks, he said.

An employee at Kroger in Clute said they were wiping down shopping carts, a dispenser of Purell wipes was out

because people had been “grabbing them by the ropeful,” she said.

While they’re still preparing to-go orders, local eating establishments and social locations such as Brew-n-Bake and The Grape Taste in Lake Jackson have seen a precipitous downturn in business.

“We don’t even have more than — it’s really one or two, three people at a time picking up,” said Luke Kibodeaux, a server at The Grape Taste.

Due to the downturn in business, however, Lopeman had to let go of 80 percent of her staff Friday, and the restaurant is now operating with just four employees, she said.

Brew-n-Bake is taking a hit, too, but continues to encourage and fulfill pick-up orders. All the chairs have been placed on top of the tables to discourage seating, and only 10 customers are allowed inside at one time.

“We’re really going with the CDC guidelines of 6 feet between each customer,” manager Victor Mills said.

Before dine-in services were closed, they were trying to space out seating for guests as much as possible, Mills said.

They continue to take precautions, including sanitizing every surface more regularly than usual, washing their hands between every order and interaction, and having removed the self-serve coffee bar, Mills said.

Many people seem to be taking social distancing seriously on their own, however, and are making the choice to stay away from establishments they normally frequent.

“The trend of come-and-go coffee in the morning hasn’t been affected too much,” Mills said. “But as the evening goes on, it just — you can definitely tell there’s an impact with sales. We will normally have roughly 10 to 20 customers every couple of minutes. We now probably have that for the last three hours of our service every evening.”

A former Port Neches-Groves student is making her mark as a top education administrator in Texas. Dr. Danielle Jackson of... read more