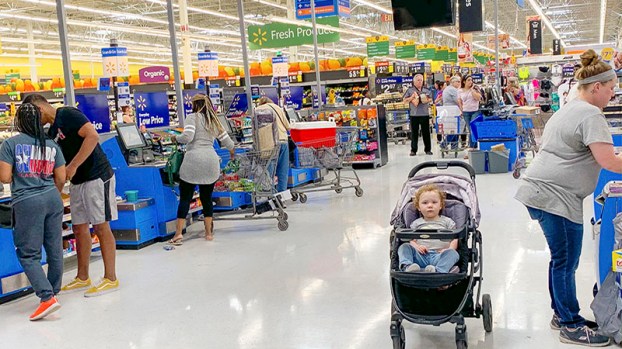 Port Arthur shoppers check out Thursday at Walmart. Many flooded the store early in the afternoon due to the store's new hours. (Cassandra Jenkins/The News)

Jefferson County community members are sharing mixed feelings regarding the spread of COVID-19 throughout the public.

With Beaumont’s announcement of the first positive coronavirus case in the county, some people plead for urgency to enact stricter rules, while others are more concerned with the fallout from the pandemic, than the threat of the virus itself.

Either way, all are feeling the wrath of the infection in some form or fashion.

For Tomeisha Luckett, it is the heartbreak that accompanied Jefferson County Judge Jeff Branick’s Wednesday night decree ordering the shut down of dine-in restaurants.

As a manager at Tia Juanita’s in Port Arthur, Luckett helped close shop Wednesday night with an aching heart for the dozens of employees being sent home without a paycheck.

“It’s devastating,” she said. “To send all those people home, it hurts.” 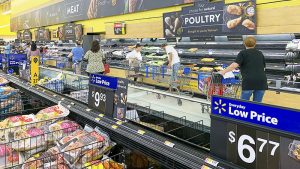 Luckett believes the panic is the worst part of the crisis.

“I was in Sam’s Club on Monday doing my normal shopping and the number of people standing in line wrapped around the building, it was like ‘Really?’ she said. “People are making us run out because they are hoarding everything and there is no need for it.”

With a cart full of paper towels, sanitizer and other items, Luckett spent Thursday afternoon in Target picking up necessities for friends and co-workers.

“I’m here because co-workers of mine had asked for items they could not find or didn’t have the time to go out and shop for,” she said. “We depleted our own resources right here in our own community instead of just shopping like we normally shop.”

A native of Atlanta, Luckett has a background in healthcare working previously as a medical assistance. 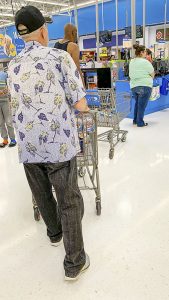 People line up Thursday at Walmart’s self-checkout area after stocking up on groceries and necessities. (Cassandra Jenkins/The News)

Groves native Heather Roberts is among one of the groups categorized as “at risk.” Roberts, currently self-quarantined, is a mother of four and pregnant. Her major concern is for the more vulnerable populations, such as herself.

“The younger crowd and people without underlying conditions don’t need to be as concerned,” she said. “However, they don’t need to be flippant either with the fact that they can spread it to the vulnerable populations who have a much higher mortality rate. Compassion, consideration and disruption in routine are necessary to protect our more vulnerable.”

Joe Hunt, a Groves native, believes the virus is spreading faster and farther than first thought and people need to take the threat more seriously.

“When testing starts in a big way, I think we find many had it before March even got here,” he said.

On Thursday, Marlow visited the Port Arthur Walmart, her fifth grocery store of the week, looking for essential items to her diet.

“Everyone is wiping out all the grocery stores for no reason,” she said. “I can’t just eat carbs. I depend on healthy foods and meats. I can’t do starches like mashed potatoes or pasta, so it’s been very hard.”

Marlow’s husband is also on a no-carb diet due to health concerns.

“Currently, we are living off of yogurt and low-carb tortillas,” she said. “It’s been stressful on everyone, but especially families like mine who depend on bi-weekly grocery runs. I go again next week and I’m scared they won’t have anything we need, again.”

Paul Richmond, whose daughter runs track at Nederland High School, said there needs to be more social distancing and enforcement by officials.

“That’s the only way we’re going to beat this thing,” Richmond said.

PORT NECHES — If all goes well, Port Neches RiverFest could be the first local festival held after the recent... read more