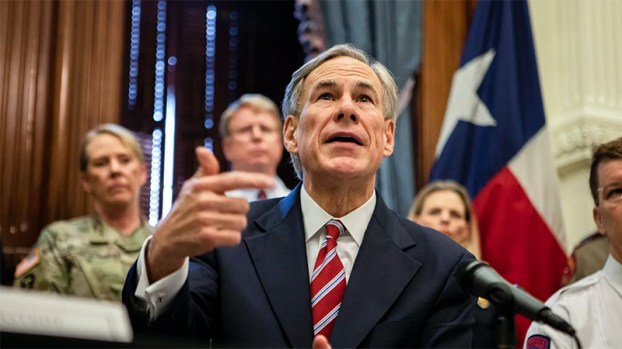 Gov. Greg Abbott declares a statewide emergency amid new cases of COVID-19 in the state on March 13, 2020 at the state capitol. (Eddie Gaspar/The Texas Tribune)

AUSTIN, Texas (AP) — Texas Gov. Greg Abbott ordered schools closed statewide Thursday until at least April 3 and banned dine-in eating and gathering in groups of more than 10 as the state ramps up efforts to battle the coronavirus.

Until the announcement, Abbott had left most of those decisions to local governments.

Abbott’s order also will shut down gyms and bars and restricts access to nursing homes. The order takes effect at 11:59 p.m. Friday, according to the governor’s office.

The governor said his order ensures Texas is following guidance provided by the federal government.

While schools were ordered closed, Abbott said education officials are to develop education alternatives such as online learning for their students.

“This executive order is not a shelter in place order,” Abbott said. “It does not prohibit people from doing things like going to the grocery store, gas stations, parks or banks.”

Abbott said government remains open. Businesses are allowed to remain open but Abbott urged them to limit who is required to report to an office and to allow employees to work from home if they can.

The order also does not restrict domestic travel, Abbott said.

Abbott issued the order hours after Houston opened the first drive-thru testing in the nation’s fourth-largest city, but officials there warned they didn’t have enough kits or protective gear to meet demand.

The governor’s order came on the heels of a statewide public health disaster declaration, which he said is the first in Texas since 1901.

Texas has more than 140 cases and five deaths related to the virus that causes COVID-19.
For most people, the virus causes only mild or moderate symptoms, such as fever and cough.

For some, especially older adults and people with preexisting health problems, it can cause more severe illness, including pneumonia.

The vast majority of people recover. People with mild cases recover in about two weeks, according to the World Health Organization, while others could take three to six weeks to get well.

Local police departments are not anticipating any real problems with the juvenile curfew handed down this week by Jefferson County... read more