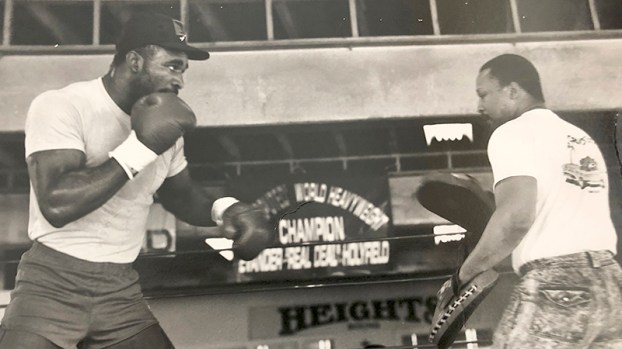 WHERE ARE THEY NOW — Ronnie Shields finds home as boxer, trainer

Ronnie Shields used to think his future was in football.

The Port Arthur native frequently watched football with his father, and the two of them shared a love of the sport. He tried out for the football team when he was 13 years old, shortly afterward the Port Arthur Independent School District transferred him to Woodrow Wilson Middle School, which was created from the elementary school of the same name.

That also meant that he’d have to try out for the team again. Shields declined to do so.

“I made the team, and then they closed the school down and they switched us to Woodrow Wilson Elementary School,” Shields said. “During that switch they told me I had to try out again for the football team, that didn’t bode well for me.”

His friends had frequently discussed boxing around him, another sport he and his father watched on TV.

Without a team to play on, Shields went to Richard Menchaca’s boxing gym with his friends. Menchaca was the first Texan to ever win the National Golden Gloves Championship, a national amateur boxing tournament previously won by boxers like Ali and Frazier.

At the gym Rivers Romero took Shields under his wing and taught him the basics.

“To me, he was a really good coach because he brought discipline to all the fighters that were under his control,” Shields said. “Rivers, he taught us anything we need to know and how to fight the different styles of boxers that are out there. We had to do all this in training. When it came to the fight, it wasn’t foreign to us to see a certain style.”

From that point on, boxing became Shields’ passion and blossomed into a profoundly successful career as an amateur, professional and now as a trainer.

Romero, who still lives in Port Arthur, said Shields was a natural boxer and a dedicated student .

“He was 75 pounds, I think, a really skinny kid,” he said of first meeting Shields. “We got to working with him and he looked pretty good. He started fighting and he started winning, beating everybody he fought. He stayed in the gym, worked hard and that’s all he committed to was boxing. You couldn’t get him out of the gym. Whenever it opened, he’d be there and he’d be the last to leave. He just kept working and getting better every year.”

“Once I thought of boxing, I knew I found something that I had a passion for,” he said. “I really did love football, and I’m still in love with football, but boxing became my passion.”

That passion translated into an amateur career that saw him win 242 games and lose only 21.

Shields was himself a three-time winner of the Golden Gloves Championship in 1975, 1976 and 1978. He fought “Sugar” Ray Leonard for a spot on the 1976 Olympic boxing team, though he lost to the five-time world title winner.

Shields was going to try again for the Olympics in 1980, only for the United States to boycott the event. He turned professional after that, winning 26 matches, losing 11 and tying one before retiring in 1988.

Shields was approached to help train a few of the members of the 1984 Olympic boxing team, which included gold medalists like Paul Gonzales, Steve McCrory, Meldrick Taylor and Pernell Whitaker. Shields turned down the offer.

“The first time, I really wasn’t sure because I had just quit boxing, and I really didn’t know what I wanted to do,” he said. “At the gym I was training at, I was helping all the young amateurs, and I just wanted to do that for a little while.”

He changed his mind when the trainers came back a month later, asking him just to give it a try.

“The first person they put me in the ring to start working with was Evander Holyfield,” Shields said. “Evander liked the way I did the hand pads with him, and then all the other guys wanted to do it with me. The head trainer told me I had a gift. I started working with them, and then finally I guess I got on my own after so many years. Now I’m on my own. I started training different fighters myself.”

Throughout his still ongoing career he’s trained some of the best boxers around, including Mike Tyson, Whitaker and Vernon Forrest. Holyfield, his first pupil, was the only boxer in history to win the undisputed championship in two weight classes for cruiserweight and heavyweight. Jermall Charlo, one of his current trainees at his Plex Gym in Stafford, near Houston, holds the World Boxing Council middleweight title.

His own record and his stable of trainees are what draw the big names to his gym, Shields says.

“The majority of the guys that I ever worked on already looked at my amateur career and my pro career, and they look at the people they see me associating with,” he said. “I’m associating myself with the top people in the sport, and that brings people in throughout. I get calls from people all over the world, and some people I take and some people I don’t. It just depends on how many fighters I have in the gym right now.”

When he trains, he trains with the basics in mind, just as he trained with Romero.

“I like the old-school mentality,” he said. “You work hard, eat right, live right, you do all the basic things, none of the fancy stuff, try not to be anything other than who you are. I think that’s the most important thing, is that just stay with the basics.”

Though Shields wasn’t thinking much of a career in boxing when he started, Romero saw something inside him.

“He started to help train the younger kids and that helped him a lot,” Romero said. “Some people get into the sport and they know about it, and he was that way. He was a good kid, never got into trouble, and everywhere we’d go, people liked him. You’ve just got to be dedicated like he was. Other kids would be out there partying. He just worked out and kept in shape.

“There aren’t going to be another one like Ronnie because Ronnie was a true boxer. He dedicated himself to boxing.”

The Lamar State College Port Arthur softball team, along with all other NJCAA spring sports, is facing a suspension of... read more