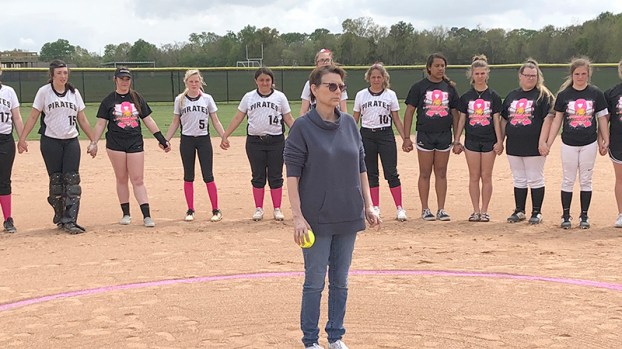 Honored to help: Nederland, Vidor swing for a good cause

Just one day prior, Cindy Ford had undergone the first of 12 chemotherapy treatments she is receiving to treat breast cancer, but she came out to the softball field anyway.

Her great niece, senior outfielder Savannah Maxwell, asked her to throw the first pitch during Friday’s Strike Out Cancer games, and she was determined not to miss it.

“She asked if I could do it, and the chemo hasn’t been as hard on me as it’s been on others,” Ford said. “I feel pretty good so I agreed.”

The gesture wasn’t lost on Maxwell, who says her great aunt is known for doing anything for her family. 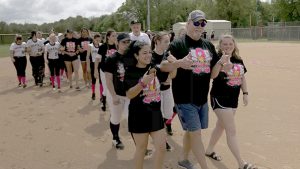 Phillip Kingston is accompanied by Nederland senior second baseman Brittany Taylor, right, and sophomore second baseman Avery Lozano along with others who survived, are battling or are remembering victims of cancer Friday as they walk the bases before the start of the Nederland and Vidor junior varsity softball game. (Brad Robichaux/The News)

“She’s just been so good to every person in our family no matter what’s going on in her life, and we have a real big family,” Maxwell said. “She just takes care of us no matter what. Even though she knew she had chemo yesterday, she agreed to do it, knowing that she could have not felt good today. It just shows a lot of how good a person she is.”

Ford is just happy to do what she can to help, and knows that she’s been especially lucky with her own experience with cancer.

“I smoked years ago and quit, but I got oral cancer,” she said. “When it came back they were treating the oral cancer and found breast cancer. I had been very lucky because there has been no lymph node spread. I was also lucky in that I was a nurse so I knew what to look for. Very early I knew I needed to get my mouth checked, but a lot of people don’t.”

Ford is glad to see the teams and schools coming out to support a good cause so close to her heart.

“I think it’s great the kids are out here and the schools are out here getting to participate in something altruistic instead of just laying around,” she said.

Vidor head softball coach Nikki Trahan was happy to participate in the games for a second year. 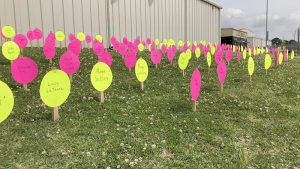 The lawn behind Nederland High School is addoned with the names of cancer survivors, those battling cancer, and those who have passed during Friday’s Strke Out Cancer softball games between Nederland and Vidor. (Brad Robichaux/The News)

“We saw what a great thing it was last year with the community response,” she said. “Whenever we heard from [Nederland Coach Will] Mallett, we were honored that he picked us to be able to do this again. We’re excited, honored and humbled to be able to share this experience with them again.”

This year in particular the Vidor team was especially driven since Trahan said one of their own classmates was diagnosed with a rare form of cancer. For the privacy of the student and family, Trahan declined to provide the student’s name, but several Vidor players wore bracelets with his name on them, and one of the game balls also had his name written on it.

“The girls made sure that his name was on the balls and it really kind of hit home for them,” Trahan said. “He’s really good friends with our girls. I taught him when he was a freshman. For the girls that just made it a little more personal, and he was the first one we thought about when Coach Mallett asked us to be part of this again.”

Mallett said while attendance was slow, the teams still managed to raise a good bit of money for the American Cancer Society. He said some of the lower turnout is due to the early schedule and concerns over the outbreak of the coronavirus.

“It’s going to be tougher when you’ve got people that are worried about the health stuff and don’t want to get away from the house, and with it being earlier in the day,” he said. “I think we still had a good showing and we’re still raising a good amount of money. I think the raffle went really well and we’ve had some good donations from local businesses. I think it’s going to end up being great.”

Concerns about the coronavirus have made limited impact on area sports. As of Thursday afternoon, no scheduled games or tournaments... read more