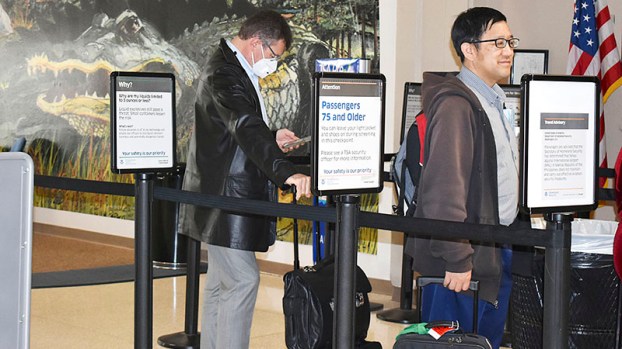 Philippe Barroux, left, and David Chin prepare to depart Jack Brooks Regional Airport on Thursday. Both Barroux and Chin said they are not afraid of traveling. (Mary Meaux/The News)

Air travelers at Jack Brooks Regional Airport who spoke with The News this week were not overly concerned about COVID-19 or coronavirus.

Inside the airport David Chin, who was headed Thursday to the Dallas-Fort Worth area, said he is not worried about the coronavirus and as long as you take care of yourself and take normal precautions, you should be OK.

Behind him was Philippe Barroux of New York. Barroux, a businessman who travels, said he is not afraid to travel; three weeks ago he was in China and was quarantined for two weeks. Then last week he was in France.

On Thursday he was flying to Dallas-Fort Worth, then home.

American Eagle has flights out of the Jack Brooks airport to DFW daily. Passengers will fly in 44- or 50-seat regional jets, according to the airport’s website. 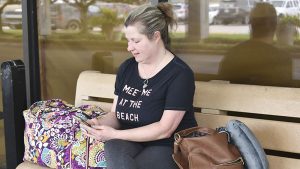 Rebecca Dashner of the Dallas-Fort Worth area waits to board a flight home after visiting the area. (Mary Meaux/The News)

Airport manager Alex Rupp said there are no travel restrictions in place at the Jefferson County airport, adding local officials are following the practices set forth by American Airlines.

Rupp said there are numerous locations throughout the facility for workers and visitors to wash their hands with soap, water and hand sanitizer.

Rebecca Dashner, a biologist, was headed back home via the DFW after a visit in the area.

She isn’t afraid of traveling and has a trip planned to go to Panama City Beach for a baseball event. She is hoping there will be no change to the trip.

In the meantime she will be stockpiling canned goods as the virus continues to spread worldwide.

“What I really would prefer for the U.S. is no quarantines, everybody will be exposed anyway,” she said.

She understands this might mean some will die and is saddened by this, but by exposure comes immunity.

“I don’t think shutting things down will help,” she said.

She and her husband are scientists and in close conversation with a lot of doctors, hence the reasoning for her thoughts.
“We just need to let it run its course,” she said. “It’s inevitable. It’s better if we let it happen the way it’s going to happen. Some will get a part of it and some will have flu-like illness.”

Quarantining is a poor choice.

“I think everybody needs to go about their lives,” she said. “It’s inevitable. We’ll all be exposed. We cannot live in fear. 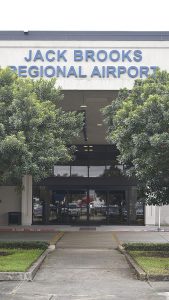 Recent travelers at Jack Brooks Regional Airport said they are not afraid to fly.

President Donald Trump’s decision Wednesday to impose a 30-day ban on most Europeans entering the United States is the latest setback for an airline industry that is reeling from a drop in bookings and a surge in people who are canceling reservations for fear of contracting the coronavirus, according to the Associated Press.

The ban, to begin at midnight Friday, won’t apply to Americans trying to return home — though they will be subject to “enhanced” health screening — or to citizens of the United Kingdom. But Trump’s move is sure to drastically escalate the disruptions facing global airlines and travelers on some of the most heavily traveled routes.