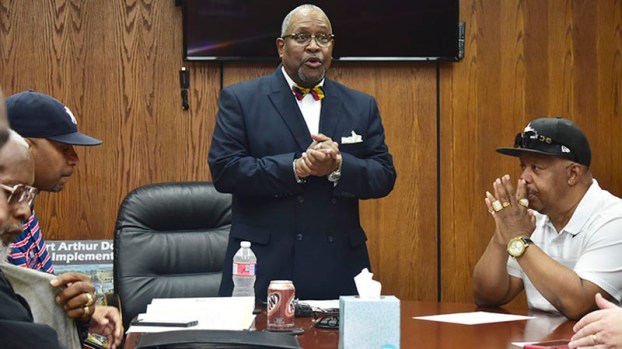 Mayor: Port Arthur responding to COVID-19 in ‘slow down’ mode

If a case of the coronavirus is confirmed in Port Arthur, Mayor Thurman Bartie says, he will have every citizen quarantined.

Only greeting visitors with an elbow touch rather than a handshake, Bartie held a news conference with other city, port, educational and health leaders at city hall Friday to brief the city’s response to the novel virus, which is also termed COVID-19. Bartie did not announce any changes to the city’s operations, adding Port Arthur is moving forward in a “slow down” mode rather than a “shut down” mode. Bartie returned Thursday night from a National League of Cities Congressional City Conference, where local officials gathered to hear from policymakers on Capitol Hill about funding opportunities for economic growth.

Almost an hour into the conference, President Trump declared a national emergency against COVID-19. That means billions of dollars will be available to assist government entities that suffer hardships as a result of the disease. The city of Port Arthur and other public entities will not see funding if it’s able to continue operations amid the crisis, Bartie said. 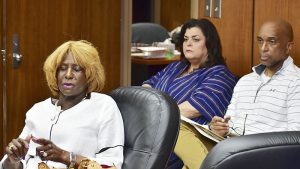 As of 1 p.m. Friday, Jefferson County still has not had a confirmed case of coronavirus. Judith Smith, the director of the Port Arthur Health Department, said neither she nor her team can make the call as to whether the city enters into “shut down” mode but only confirm a case of coronavirus.

The health department still had not received any test kits for coronavirus as of Friday afternoon, Smith said.

Not everyone can be tested, however, she added, but if anyone in Port Arthur tests positive for coronavirus, the department will conduct surveillance and take down information about the affected person’s whereabouts and what he or she has done recently.

Glenn Alexander, a Port Arthur nurse practitioner, said health officials will look for fever, cough, lower respiratory problems and tightening of or pain in the chest in checking for COVID-19. Smith has asked those who experience any of these symptoms to contact their health provider. 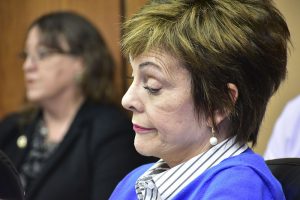 The Port Arthur and Sabine Pass independent school districts still plan to resume classes Monday, as the city has not confirmed a COVID-19 case. PAISD Superintendent Dr. Mark Porterie and Sabine Pass Superintendent Kristi Heid said both are staying in contact with other educational leaders and will re-evaluate the decision in the event “something does occur.”

“We are cleaning,” Porterie said. “We are going to work with our students. We will have wipes that they can use for their computers. We will work with our staff in order to clean rooms, but at this time, it’s important for us to have our kids working together toward what they need to work toward, and that’s learning.”

Tekoa Academy of Accelerated Studies CEO Dr. Paula Richardson said she is having a Sunday meeting with her safety staff to plan how to bring in food without it being contaminated. Classes at Tekoa Academy will resume Monday but closed Tuesday, when she expects food to arrive.

Bottled water will be provided at Tekoa, as students are not allowed to drink from the fountain, she said.

Classes at Tekoa’s Port Arthur and Orange campuses were canceled Feb. 27 to sanitize the school as a preventative measure to coronavirus.

Richardson also said one Tekoa employee went to Europe for vacation against her recommendation. Richardson said she told the employee, whom she did not name, to not return to campus upon arrival, adding he will have to self-quarantine for 14 days, per federal proclamation.

Bob Hope School officials were not present at the news conference.

Lamar State College Port Arthur on Thursday announced that classes will not resume until March 23. LSCPA President Dr. Betty Reynard said another update on classes would be available by Wednesday.

Bartie also said the city would prepare with the public schools to address the nutritional needs of students dealing with food insecurity in the event the schools must close. The superintendents, however, must make the decision to feed the students in response, he said.

Directors of the ports of Port Arthur and Sabine Pass said they have not changed their method of operation amid the crisis.

“We don’t have international trading dock space,” Port of Sabine Pass Director Mic Cowart said. “We just move internal communication to our employees about precautionary measures to be aware of what’s going on to be aware for themselves and their families as well, and for our customers, more or less of the same thing.”

Port of Port Arthur Director Larry Kelley said the coronavirus has not been an issue for any crewman who’s docked there.

This last week the Port Arthur Independent School District was scheduled to have a relaxing and reinvigorating Spring Break. Instead... read more