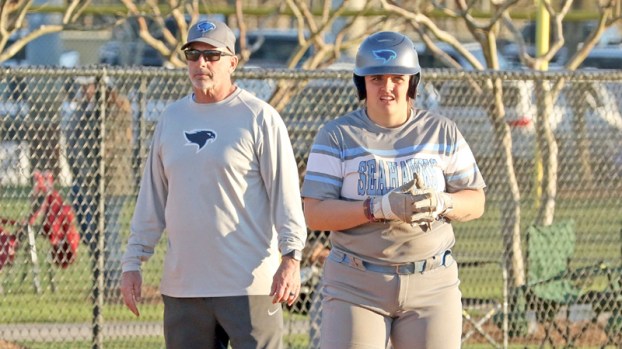 Lamar State head coach Vance Edwards stands next to freshman Savannah Trahan while she waits on base during the Seahawks’ game against Pensacola State in Gulf Shores, Ala., on Feb. 15. (Lamar State sports information)

The Lamar State softball team has had some tough weeks but it’s all been in preparation for the toughest weekend of their season.

On Friday the Seahawks host two games against Blinn College, the first of their Region XIV conference opponents, followed on Saturday by two more against onference foe San Jacinto College-South. The first game for each begins at 1 p.m., followed by the second at 3 p.m.

“What we’ve been telling the kids is that this is the start of another season,” head coach Vance Edwards said. “Despite everything we’ve done in the past, good or bad, we’ve got a fresh start now, 0-0, and if we can set the tone here this weekend we’ll set the tone for the rest of the conference.”

It won’t be easy. While Blinn College’s preseason win record is just under .500 at 7-9, San Jacinto is in the best position of the South Zone Division at 19-4. Lamar State’s record is 5-14, with last weekend’s most recent two games ending in losses against East Zone rival Angelina College 7-4 and 21-0.

“If we just play our game, stay focused on our jobs, do what we’re capable of doing and eliminate the mental errors, I think we’ll be just fine,” he said.

“We have a pretty strong team this year and I think we’ll go far in conference and in the tournament,” she said.

“In high school you can go for yourself, but in college you actually have a team here,” she said. “You’ve got to work for your team and hold yourself to a higher standard than high school. There’s more excitement, and the adrenaline is more for college.”

Edwards says the Seahawks still need to work on communicating better and staying focused, a sentiment with which Edwards agrees.

“That’s what we’re going to be focused on in the next few days: staying focused on the mental game and sharpening up a few things that we need to sharpen up,” he said. “We’re hitting the ball well, so if we can keep that up we can keep rolling.”

Being mentally prepared is one of the best ways Edwards believes the Seahawks can get ready to face Blinn and San Jacinto.

“We just need to be mentally ready, and if we can get our pitching to do what it’s supposed to do I think we’ll be successful,” he said. “Pitching is kind of key right now, but if we can get started strong then I think we’ll be very successful. Our defense is playing well, and we’re hitting the ball well. If we could get things rolling in the right direction we’ll be just fine.”

Greyson Ramburg is getting a taste for playing out in the field, and Nederland coach Keith Barrow believes the senior... read more