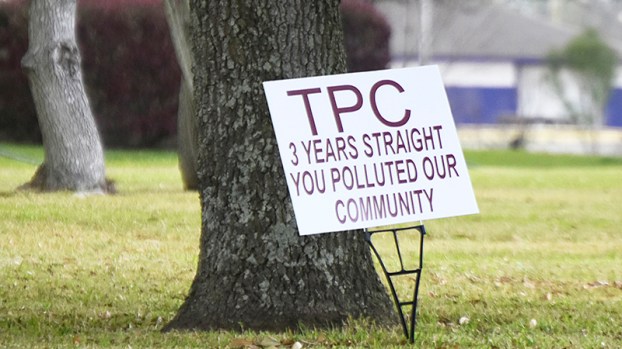 A sign protesting TPC Group sits in a field not far from the Nov. 27 blast zone. (Mary Meaux/The News)

PORT NECHES — Signs have popped up across Port Neches calling out TPC Group for a number of offenses from polluting to its method of paying residents impacted by the Nov. 27 explosions to being unethical.

Port Neches resident Daniel Reynolds said he made the signs to support the community after learning another resident wanted to place yard signs at his home.

“We don’t feel like we’re being represented,” Reynolds said. “I think that’s a lot of people’s view.”

The Port Neches man said he feels like TPC is lying to people. And while his house isn’t damaged to where he can’t live in it, he said it does have damage that needs to be fixed.

The signs lambast the chemical company for pollution and corporate greed. He said anger, disappointment and frustration is present in the community. He’s not naïve; he knows that Southeast Texas is a petrochemical area and that is the lifeblood of the area but “not to the detriment of lives and health.”

Many locals are employed in the petrochemical industry, not just at TPC, but at some point one has to ask if this is morally right, he said.

TPC has been fined for violations on numerous occasions dating back years. In February, the Texas Attorney General, on behalf of the Texas Commission on Environmental Quality, filed a lawsuit against TPC Group.

TPC Group was asked for its take on the public’s negative feelings toward the company.

Sara Cronin, vice-president of communications and public affairs with TPC Group, said the company has been a neighbor in the Port Neches community for more than 13 years and the plant has been in operation since the 1940s. The company engages in ongoing dialogue in the community to understand and respond to the questions and concerns of all our stakeholders.

“We also work continuously to establish effective and transparent relationships with state and local regulators as part of our commitment to safe and environmentally responsible operations,” Cronin said. “We understand and recognize the community’s frustration as TPC Group works with our neighbors to recover from the November 27 event at our Port Neches Operations. TPC Group’s voluntary claims process went into effect on November 27, 2019, and has received high levels of participation and we continue to make progress daily. The Company remains committed to providing the funds necessary to repair damage to impacted homes.”

A community assistance helpline remains active to address claimants’ questions, she said. Information and updates on the response efforts and more are provided at portnechesresponse.com.

It’s been an unprecedented week, one in which oil majors Russia and Saudi Arabia saw anything but eye-to-eye on lowering... read more