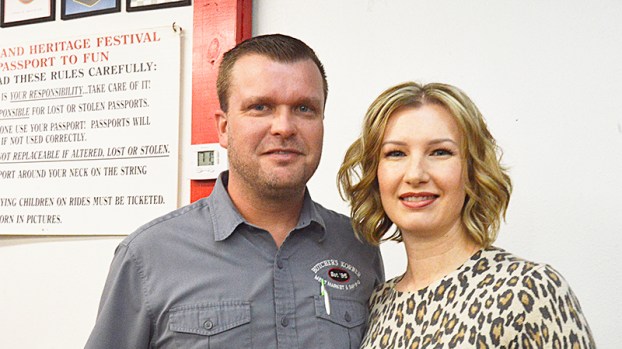 Scott Nutt is not out to make headlines or seek attention.

What he does do, according to friends and associates, is run a superb local restaurant and give back to his community in a big way.

Nederland Heritage Festival Executive Director Shannon Hemby said Scott is a wonderful man who has done so much for the city.

“He is so humble,” Hemby said. “He doesn’t really feel he deserves the recognition, but when you get the former Mr. Nederlands together and they look over all the criteria of everyone’s names that are thrown on the table, you look at Scott and realize he is a giving man and does it without wanting anything in return. To me, that is picking a good Mr. Nederland.”

C.J. Breaux opened Butchers Korner on Boston Avenue in 1995. It was only a couple of years after that Scott joined the team as a teenage employee.

Breaux said Scott was a “good young man” determined to do well.

“He takes care of the place like it is his; it’s always kind of been that way,” Breaux said. “He is somebody you can trust. It doesn’t surprise me that he is Mr. Nederland.

“He has been around this town a long time, loves it and is raising his kids here. The biggest part of what he does is giving back to the community and what he does for others.”

According to the Heritage Festival, Scott spends the majority of his time serving others as a member of several community organizations. He is a board member of the Nederland Chamber of Commerce, member of Grant’s Guardians, advisor to the Nederland High School CTE program, member of the Noon Optimist Club and volunteer at Southeast Texas Circle of Hope and Nederland Little League.

Scott said the community and his partnership with Breaux has brought him a lot, so it feels natural to give back to the community.

“I like to cook, interact with people and I like the business part of it,” Scott said. “C.J. owns the business, and he has taught me a lot. He got my wheels turning on how I want to one day go into business for myself. We work great together and have grown it from the beginning.”

Scott especially loves the Butchers Korner location on Boston Avenue in the heart of Nederland.

“That was your main part of town in the old days, and you still have that to this day with the fire station, police department and post office,” he said. “The Heritage Festival is on the same street. There are a lot of great shops, cafés and great businesses. It’s a good location.”

Scott, who said he has been attending the festival for as long as he can remember, spent his youth there each year hanging out with friends and riding rides.

“Growing up now, I’m bringing my kids doing the same thing and it’s grown a whole lot since I was a kid,” he said. “That tells you how successful it is every year. It hasn’t ever stopped. It’s been a continuous thing that started before I was ever born. They put on a good event every year for the community.”

Scott said he was, honestly, speechless when told of his selection as Mr. Nederland.

He said a great group of guys make up the Mr. Nederland fraternity, adding they are some of the best guys he knows and looks up to.

“Some are businessmen and some are just local people who do great in the community,” he said. “It’s a lot of great guys, and I’m lucky to be friends with a majority of them. I’m really honored.”

Scott is looking forward to this year’s Nederland Heritage Festival with the same anticipation as years past, which includes competing in the chili cook-off.

It’s a pretty cool turn of events for the 1999 Nederland High School graduate who, as a teenager, didn’t imagine this course for his life.

“I’m glad it worked out the way it did,” he said. “As a kid you sometimes don’t know what you want with your dreams and ambitions. Then some things don’t work out for a reason. I’m glad it turned out like it did. I met my wife, I have kids and I live here. I don’t see myself moving out of Nederland anytime soon.”

Scott has been married to his wife, Adrianne, for 12 years, and they have three children; Gracie, Natalie and Ryan.

NEDERLAND — For the 47th year, the Nederland Heritage Festival launches a week of family fun on Boston Avenue. This... read more