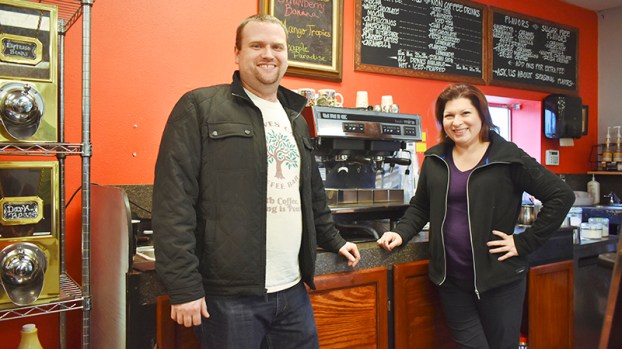 Scott and Tina Legendre, owners of Groves Café, will be closing the doors of the business later this month. (Mary Meaux/The News)

Groves Café, where customers are like family, to shut its doors this month

And that feeling is mutual.

Don Sodman, Tommie Estrada, Lidia Johnson and Bruno — “everybody knows him by that name” — sat at a table together for coffee on Thursday just as they have daily for quite some time.

They are part of a morning coffee group that made the café their second home, just as countless others have done since 2015. Estrada is known to get upset if they come in and find someone at their table, she said with a laugh.

“I’m going to miss our little group,” she said.

The Legendres recently announced they are closing the café March 29.

The decision to close the doors was borne out of the need to spend more time with family.

Scott and Tina have a son, Patrick, who turns 3 this year and will be trying out for soccer.

“Between my job being over in Deep Park and working that almost every day, having this place and having a little boy, there is too much going on at one time,” Scott said. “I call it a pressure valve. My laundry list (of things to do) is like 200 items long and I had to let go of something. I have to pick my son. I have to pick the stable life and do what we have to do, and at the end of it all we decided this is what I had to let go.”

Then, if he doesn’t have to work late, he leaves by 5:30 p.m., gets home around 7 p.m. and has a two-hour window to be with his wife and son. Then there’s bathing and feeding and putting his son to bed and after all of that he sometimes has to work on his laptop, then heads to bed and does it again four to five hours later.

Tina, likewise, is busy at the café for hours and hours. They get help with Patrick from her parents. He sometimes stays overnight and is brought to school by 9 a.m.

One of the biggest decision makers came in January when Patrick told his parents he was ready to go home. The young child had spent so much time at his grandparents’ home he considered it his home.

“We had to tell him, ‘No, you’re staying here tonight,’ and he didn’t want to look at us. He just turned his head away and I said, oh, that’s your cue,” Scott said.

Time at the café

A lot of time is spent at the café, so much so that Tina added photos of family, her son and paintings she has acquired. Since she spends more time at the café then at home, it was only reasonable she decorate the walls this way.

Groves Café has been the site of many special occasions, from hosting Mexican Heritage Folkloric Dancers in need of a space to practice to art shows, birthday parties and even a wedding.

Tina and Scott Legendre with son Patrick pose for a photo with Don Sodman, the 2019 Groves Chamber of Commerce president, during an awards ceremony where Groves Café was honored as Small Business Person of the Year.

The Legendres care about their employees and customers. The couple hopes to have imparted enough knowledge to employees so they can go forth and get more professional work. And that has been the case so far.

One former employee followed her dream with the encouragement of Tina and has opened her own coffee shop, and another went on to work in a different industry.

The owners become close to their customers. If they miss a day, Tina is known to call them up — and even show up — at their door.

And the customers care about the Legendres.

One Saturday, Tina was home with her son and Scott had to come in to the café because an employee wasn’t able to show up. He ended up creating a limited menu and got to work.

“The customers asked how they could help,” he said. “We had two running food, two washing dishes and one doing coffee.”

While the couple will deeply miss the customers who became family, they will be able to do things they haven’t been able to do in a while.

“Vacation,” Scott said when asked about their plans for the future.

The initial thought was to take a cruise, but that will have to wait. They do plan to pick a weekend and head to visit Scott’s family in Austin and Georgetown and take some mini-vacations.

Then there are the things that need to be done at their own home.

Tina said they would now have time to be more involved with church activities.

As she spoke a group of people walked in. It was members of Immaculate Conception Catholic Church and the Rev. J.C. Coon. They stopped at the front counter and gave their orders before finding a seat.

The City of Port Arthur will administer an Entry Level Service examination for the position of police officer at 9... read more