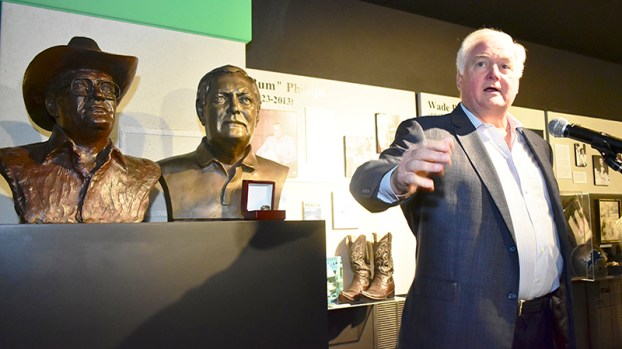 A group from the Golden Triangle is organizing to become the 121st chapter of the National Football Foundation, and on Thursday they made a big public splash in their campaign to recruit members.

Silsbee’s Randy Smith was named the 2020 Bum Phillips Golden Triangle Coach of the Year for high school football. The members of the aspiring Golden Triangle Chapter put the inaugural award together, and Bum’s son, Wade Phillips, presented to Smith a specially designed ring at the Museum of the Gulf Coast.

Smith led Silsbee to a 9-4 record in 2019 and had his second consecutive berth in the 4A state semifinals. Before these last two appearances, the last year Silsbee had reached that level of the playoffs was 1977. Wimberly defeated Silsbee 56-43 in the 2019 semifinal. 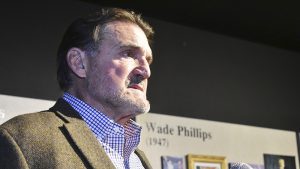 Dan Pastorini, who played quarterback for the Houston Oilers under Bum Phillips, spoke of the significance of the award at the ceremony.

“I do want to congratulate the recipient today and I thank y’all for allowing me to be here,” Pastorini said. “We’re all blessed to come close to [Bum’s] presence in our lives, whether it be from this area just knowing him in the early years. I got to know him in the best years, and I’m blessed for it and it made a better man out of me.”

Pastorini spoke of his close relationship with Phillips while playing for him. He recounted his experience after losing the 1978-79 AFC championship to the Pittsburgh Steelers 34-5 and said he told Phillips to trade him if he was the cause of the Oilers’ loss. Phillips told him to wait one more year to consider the request. After losing again to the Steelers in the 1979-80 championship 27-13, Phillips brought the request up again after Pastorini had forgotten about it.

“Because we made a deal between two men that loved each other, I was traded and went to Oakland,” Pastorini said. “Worst mistake of my life.”

Years later he learned Phillips never expected Pastorini to agree to be traded, but brought up the issue again as they had agreed.

“He respected my feelings and I respected his feelings, even though they got misconstrued somehow,” Pastorini said. “It’s loyalty, it’s friendship, it’s love and it’s respect. Some things the game of football taught me were those qualities, and I’m blessed to have played with him and become friends with Wade. I wouldn’t have given it up for anything in the world.” 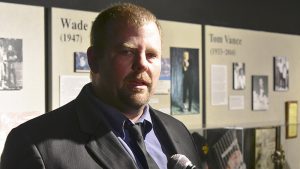 Wade Phillips, standing in front of his own Super Bowl trophy won as defensive coordinator for the 2015 Denver Broncos, spoke of his father’s, and his own, connection to high school football.

“Football-wise, that’s where he first made his name at Nederland and Port Neches coaching high school, and that’s where I started. It’s a great honor to be honoring my dad and give this to [Randy Smith], so congratulations to coach Smith. We appreciate you getting the first ring from the Bum Phillips Award.”

The ring Phillips presented to Smith was designed and donated by Lee Briggs of Balfour.

Smith, moved by the gesture, thanked his coaches, his team and his family.

“This is a big credit not only to me, but to our coaches,” he said. “We have great coaches in Silsbee. And to the kids it’s a credit to them, and my family, my wife, my son, and I thank you Dr. [Gregg] Weiss and the administration, and my family for being here.” 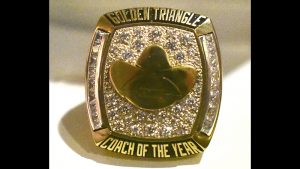 Rob Lynch, one of the Golden Triangle Chapter’s founding members, said he hoped the media attention on the award would draw in more potential members. The chapter has not yet met the 50-member threshold to become a fully chartered addition to the National Football Foundation.

“We’re still trying to do as much as we can,” Lynch said. “We wanted to do this with as much exposure as we can, and I think we got it. We’ll just move forward. Our primary concern right now is getting our 50 members. That’s what we’ve got to do first.”

Bert Brocker, like Lynch, is a member of the board of directors for the Touchdown Club of Houston, which is Houston’s chapter of the NFF. He said the Golden Triangle group wanted to put a legendary name to their award, and no name has been more legendary in the area than Bum Phillips.

“Bum’s of course the legend that he is coming from this area,” Brocker said. Wade’s a legend, too, and Rob and he had a great relationship. We just felt it would be the perfect start and way to go with this chapter.”

Next on the chapter’s plans will be a golf tournament fundraiser. Brocker said the Golden Triangle group had originally planned to host one for April, but the event has been pushed back while the group continues to find new members.

“That’s really the key — getting local support from the local businesses and local individuals,” he said. “There’s no paid members and 100% goes back into the foundation to fund scholarships.”

“Fifty members is what you have to have, and I think we’ve got 23. We feel like after this event we’ll stair-step it up and we should be there quickly. Then we’ll put the golf tournament together.”

Both Brocker and Lynch agree that looking around at all the big names lining the walls of the Sports Hall of Fame at the Museum of the Gulf Coast, there’s ample proof that the Golden Triangle needs its own chapter of the NFF.

“I look around this room and I don’t know why there’s not a National Football Foundation here,” Lynch said.

Anyone interested in joining can go online to footballfoundation.secure.force.com/membership to register. The cost for a year’s membership is $40. Under the “Select Chapter” tab, find Texas and pick Golden Triangle.

When Lamar State College Port Arthur settled down a little bit from tournament jitters, the Seahawks played one of their... read more