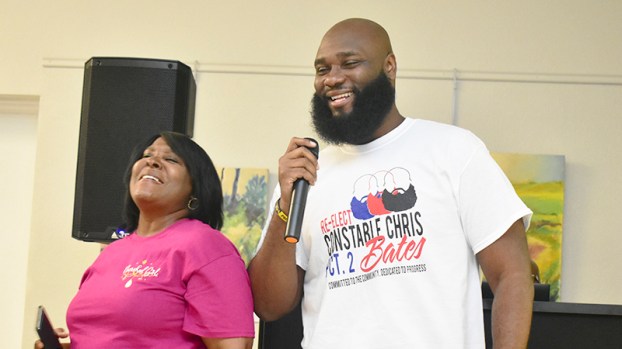 Winners talk future: Bates, Collins march to victories with no opponents for November

Now that Christopher Bates is headed toward a third term as Jefferson County Precinct 2 constable, the Port Arthur native looks forward to educating the public on what a constable does.

“It’s very different in a sense, compared to other law enforcement agencies,” he said. “I want to make sure the people know what the constable does, their role, their responsibilities in Jefferson County because it’s different in every county. There are 254 counties in the state of Texas, and every one is different as far as how the constable serves.”

Barring a challenge from an independent or write-in candidate, Bates, 34, has earned another four-year term as Precinct 2 constable following Tuesday’s primary election.

“I appreciate my opponent, Mr. Tran, and the challenge we ran up against in the race,” he said. “I do want to make sure we continue working together. If it’s really about change for the community, then I look forward to reaching out and working together.”

Tran could not be reached as of early Wednesday afternoon for comment.

Bates plans to continue charity work such as his scholarship program, toy drive and junior deputy camp, as well as remain proactive in the communities he serves as constable.

“It’s been a blessing to me,” he said of serving. “It’s definitely been an honor to hold the position and being able to serve in the capacity that I have. I don’t take it lightly. I don’t take it for granted. Everything I do, I do it for our community and I do it with the Lord leading my every step so I can make the best and right decisions moving forward. I’m definitely appreciative of it.”

Collins to remain in Precinct 8 role

Collins is the first black constable in Jefferson County.

Collins will begin a new term after dealing with personal tragedy in recent years. He suffered two major strokes three years ago, following the passing of his father and brother.

Winston congratulated Collins on his victory and said he will go back to working in the community.

“I said from the very beginning that Mr. Collins taught me,” he said. “He gave me my start. He showed me how to do civil process, and we stayed friends through all of this. All I wanted to do was be an extension of what Mr. Collins has always done.”

Bates and Collins are expected to be sworn in January 2021.

This will be Cooper’s first time to serve as precinct chair. He ran after being asked by Port Arthur Mayor Thurman Bartie about it.

Cooper looks forward to educating the public about his role.

“It doesn’t get that much recognition because it’s not a well-known position for a lot of people,” he said. “The precinct chair acknowledges the process of voting and registers people to vote, but also is there to inform the people of the political arena, not necessarily to persuade any particular vote. We continue to fight for these rights. Not only that, but to encourage the young folks and educate them on the importance of voting.”

Tuesday’s primary elections did not see a strong turnout among registered voters in Jefferson County. Of 146,703 registered, just 35,239 ballots, or 24.03 percent, were cast.

Cooper said any candidate for public office should get to know his or her precinct chair.

Graves was the first African American and the second woman to serve as party chair.

See what precautions local churches are taking ahead of coronavirus concerns

As coronavirus becomes a household term and people rush to buy hand sanitizer and masks, local houses of worship are... read more