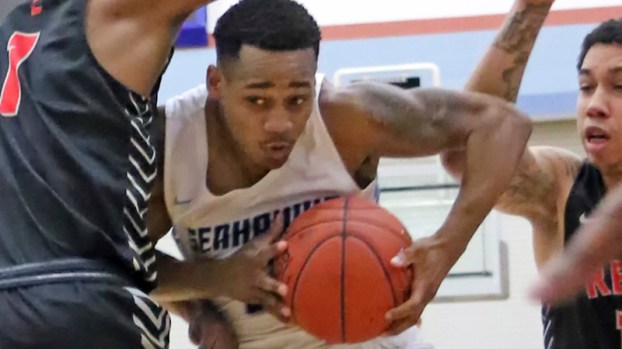 When Lamar State College Port Arthur settled down a little bit from tournament jitters, the Seahawks played one of their best games on Tuesday against Trinity Valley, head coach Lance Madison said.

“I have a lot of sophomores that have been in the postseason before and they’ve got the mentality of ‘win one more game or go home,’” Madison said. “I thought our sense of urgency was good, and I thought we had some confidence. We were nervous a bit early, but once we settled in I thought we played one of our best games all year.”

It was perhaps the first time the South Division dominated the North in the first round, Madison said.

“During the regular season when we had our crossover games when the South played the North, the north totally dominated those games and won the majority,” he said. “Here in the postseason it’s the opposite — the South dominated the North in the first round.”

It seemed to Madison that the South teams came into the tournament more focused. Jamyus Jones, who put up the most points in Tuesday’s game for the Seahawks with 28, said his teammates were playing their hearts out.

“We just got more locked in,” Jones said. “We didn’t want to go home so we’ve got to turn out.”

A major part of the Seahawks’ success came from defense, which slowed down the Cardinals’ scoring leader Deshawn Davis, who averages 21.3 points a game, to just seven on Tuesday. The Defense forced enough turnovers on the Cardinals for 23 points.

Despite the size advantage, the Seahawks managed to maneuver around the Cardinals’ zone defense and put up points, Madison said. Along with Jones’ 28, Devaughn Thomas also had a great night with 26.

“They did a good finding some seams in the zone and hitting some shots,” he said. “Then they took advantage of their quickness. Devaughn did a good job of attacking the glass with his quickness against some of their bigger slower guys.”

Madison hopes this win on the Shreveport court will become one of their advantages against No. 2 seed and South Division leader Angelina College, whom they play tonight at 6 p.m. Angelina beat the Seahawks in both of this season’s previous matches, but this will be their first game in the tournament after earning a first round bye on Tuesday.

“I’m sure they’ll come in well prepared and ready to play,” Madison said. “The only advantage we have on them is we’ve already played our first game in the tournament and we’ve won one game on the floor. We’ll just have to continue the same success recipe. We’ll have to keep them off the glass as well and we’ll have to have good defense.”

Jones is confident because the team knows Angelina well and how they play.

“We’ve just got to play tight defense like we did against Trinity Valley on Tuesday, an we’ve got to get rebounds,” Jones said. “We’re going to have to start the game better and just rebound because they’ve got a lot of big people that are aggressive at the rim.

The game tonight will be broadcast live by coopersports.net.

LA PORTE — For 71 minutes Friday night, the Memorial Titans sat together in a locker room, their coaches imparting... read more