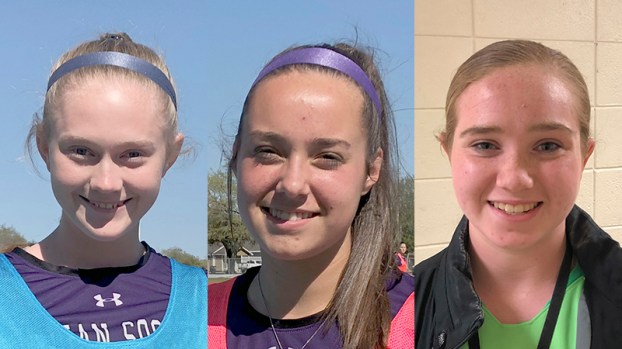 To take their game to the next level, PNG’s Rylee Miller and Grace Richard and Nederland’s Morgan McBride tried out and were selected for the pool of the South Texas Youth Soccer Association Olympic Development Team.

The trio headed to Austin Sunday for a session with some of the best soccer players in South Texas, with an eye towards showing off the skills for prospective colleges and fighting for a chance to play in regional and national showcase games.

“They have really good trainers that have played in the Olympics,” McBride said. “It’s really good if you want to go to college to have that on your resume.”

The program also brings the players to the attention of a number of scouts.

McBride says each meet is basically another tryout as players compete for limited spots on state and regional teams.

���There’s a pool of players that they already have from years before, and then new players are coming in,” McBride said. “You’re trying out to make it but if they don’t need you for that position you might not make it. You’re position is already made for you, you just have to beat the other girl.”
Miller said the degree of competition is fierce at these meets.

“You have to have a sharper mind,” she said. “It’s different from high school soccer, it’s different from club soccer. It just takes it to a whole other level, playing with good people on the whole team. It makes your standard higher.”

This inter-pool competition changes the soccer experience toward a more individually focused atmosphere.

“It’s mostly about the individual-type play,” Richard said. “It’s a team but it’s composed of several different individuals from several different clubs and schools. We all have our own different backgrounds, but the coaches try to teach us these different tactics that we all try to put together to make a uniform team.

“It’s a lot about skillset, technique, and it’s a lot about being tactically smart. It’s a whole different level because it’s not just about athleticism.”

It meant a lot for each of the three girls to be selected.

“It’s a confidence booster,” Richard said. “It helps you in your play, and not only that but we’re training more than most high school and club players.”

“Whenever I first tried out I just wanted to go and see how I matched up,” Miller said. “I didn’t know if I was going to make it or not. It gave me some confidence in knowing that I was good enough to be on that team, and it’s been a lot of fun making new friends and learning new stuff.”

“I was pretty happy about it, I was excited,” McBride said. “It was a thing I could accomplish, because I work hard to go play in college, to know that I can make it into that, it helps me believe I can do more than just high school.”

“It just means that they get to represent us and put us on the map,” Bates said. Coaches that may not know our community may now know who we are and what we stand for and our style of soccer.”

Aaron Tomplait, Nederland’s head coach, said this opportunity gives McBride the chance to see how she measures up with the best.

“It’s a great opportunity for one of our kids to go out, play some league competition, see where she stands and get her name out there a little bit,” Tomplait said. “She gets to go and see herself play against league competition and it’s a great honor for her. We’re excited for her and we hope she does very well out there.”

Butler, Jacobs get three firsts each at Bobcat Relays