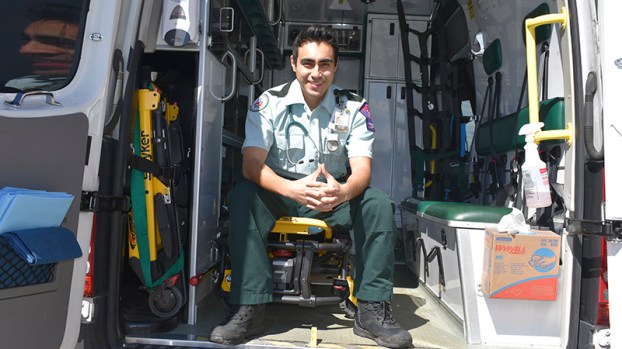 Daniel Silva is an emergency medical technician-basic with Acadian Ambulance and aspires to continue his training. (Mary Meaux/The News)

Sometimes our lives are shaped by events out of our control.

For Daniel Silva, an emergency medical technician-basic with Acadian Ambulance, the life-shaping event was the illness and later, death of his father.

A teen in Beaumont at the time, he became familiar with the sight of seeing medical personnel and knew they were there to help, no matter whether they knew him, no matter the race or religion. By age 17 came the decision to take his father off life support.

“A senior in high school. Didn’t have a driver’s license as well. I remember the very same day we buried my father was the same day I had driver’s ed,” Silva, now 24, said from the Acadian Ambulance Port Arthur office location.

“So we buried my dad earlier in the day and 6 p.m. was orientation … and it was so sad. Everybody’s fathers were there. That was the sad part. Me and my mom were the only ones there.”

Looking back in time Silva said this is where it all started for him — during a time he felt so powerless while wondering if he could have saved his dad. Even though the answer was “no,” it still sparked something inside him.

After graduation, without the funds to go to college, he got a part time job at Hobby Lobby to help his family. It didn’t provide much financially, and he sensed something was missing.

“I prayed, ‘God, what do you want me to do?’” he said. He knew military was not an option because his family depended on him. He thought about being a cop, but realized that was not it, either. 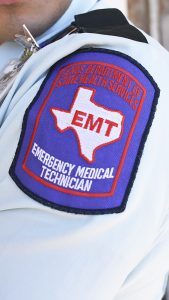 One day while watching YouTube he came across inspiration — “The Guardian Angel of Guatemala: Profiles by VICE.” The episode focused on Dr. Jorge Chiu, a cardiothoracic surgeon by day that volunteers as a paramedic at night.

The riveting episode showed Chiu putting out fires and saving lives in poor, violent areas of Guatemala, where gangs and shootings are commonplace.

“Before the video was even over, I knew,” Silva said of the career path he is on.

He looked into the requirements and found he could be a paramedic and firefighter. He began with the fire academy thinking he could work and attend school but soon learned he would be spending the majority of his time in classes — this meant he was five months without a job.

And there were naysayers along the way who thought there was no way he could do it; even his mother didn’t like the idea.

After he graduated fire academy he joined EMT school, also at Lamar Institute of Technology in Beaumont.

“I went over there and I loved it,” he said of the EMT field. “The first day I was like, this is awesome. I loved it. I loved EMS (emergency medical services). I loved medicine.”

His very first clinical was at Baptist Hospital, and with that came his first interaction with a person in cardiac arrest. He performed CPR on the patient, and after a number of chest compressions, the man’s pulse returned.

“I knew this was meant for me,” he said.

Since that day he has worked car wrecks, suicides, drownings and more, as well as assisted on private calls. There were five gunshot victims in his first month with Acadian working the Port Arthur area.

He has learned, maybe instinctively, how to react under pressure in life-or-death situations: You put your emotions aside and let your training take over.

Grant Kelley, operations supervisor with Acadian, said the ambulance service is a busy. Acadian has 11 ambulances in Port Arthur and Mid-County, and at peak time, all are operational.

Earlier this week there were 160 calls in the coverage area across Southeast Texas, including Orange and Jasper counties. The record was a little more than 180 calls in 2019.

Silva aspires to be like Dr. Jorge Chiu and maybe even become a doctor one day. He has made it to EMT-basic, and there are several other classifications until he reaches paramedic.

In addition there are a number of different careers in the paramedicine field; SWAT medic, hospital paramedic, firefighter paramedic, border patrol medic, FBI medic. The list goes on.

His mom, who was worried about his safety, is proud of him and his biggest supporter.

As he makes a career path toward the future, Silva would like to work in Houston as a firefighter and paramedic, and his dream is to do this in San Antonio, where he has family.

Coast Guard: Trouble anchored off Port Arthur with no plans to move

The Coast Guard is pursuing enforcement action against Bouchard Transportation Company after the shipping company failed to comply with a... read more