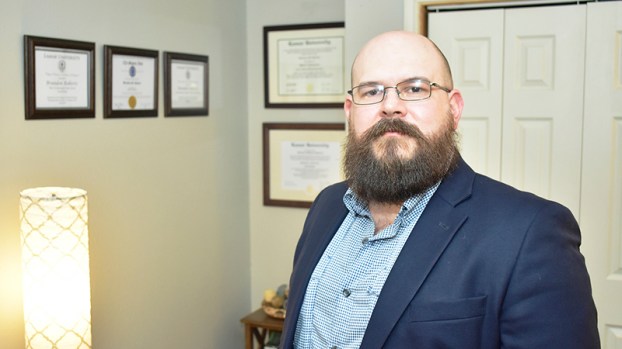 As a graduate of a Christian school and former Army interrogator, Brandon Roberts faced tough battles with mental illness as a soldier for faith and country.

“I was raised in this church, which used to be in Port Neches,” said Roberts, 36, from his office inside Ridgewood Baptist Church, just off U.S. 69 in Port Arthur. “I went to the church with my grandmother and later my parents. So, my Christian faith was always a part of my childhood. The adherence to that faith, the exploration that led me to a more solid understanding of my faith, came later on after I got out of the Army. At times, the Army challenged some aspects of faith and belief, not just combat, but a lot of stuff where kids get out and see the world and try some things.”

Roberts paused his studies at Lamar University to join the Army, where he served in the military intelligence corps. After five years in service, he returned home and finished his bachelor’s degree in 2012 and eventually earned a master’s four years later.

“When I came back from Iraq and was stationed stateside, I feel I was led back to my faith and did some seeking out and exploration, did some reading and studying,” Roberts said.

During his journey to becoming a board-certified licensed professional counselor, Roberts sought spiritual guidance from his high school principal, who is now a pastor at Ridgewood.

“We all struggle with basic questions of life such as, ‘Who am I? Why do I exist? What is wrong in the world?’ and ‘Can what is wrong in the world be made right?’” Dustin Guidry said. “Biblical Christianity has answers to those questions; hence, it makes sense when it comes to mental health that one can find help, healing and wholeness from the answers that the Christian faith posits.”

Roberts does not force his Christian beliefs on his patients, but he makes no attempt to hide from his faith.

He lists two questions on his intake form: “What is your spiritual background?” and “To what degree do you want that incorporated into therapy?”

Some seek Roberts for treatment because he’s a Christian, and others seek him in spite of it, he says. Regardless, he credits a holistic approach to mental wellness as an aspect of most good treatment providers.

“If we just treat the body and the chemical aspect, there may still be problems we don’t know how to deal with,” he said. “If I just treat situational issues through counseling, maybe there is some issue biologically or chemically that needs to be addressed.

“When we talk about holistic approach and incorporating spirituality, from my approach, I don’t make any apologies or any attempt to hide that I’m a Christian, and I believe that ultimate comfort and peace comes from Jesus Christ. But I don’t push that on people that are seeking out help from me.”

People are becoming much more aware of mental health and illness, according to Roberts. He cautions, though, such is a broad topic.

“A lot of it is just the general awareness in the culture that increases, and there’s also a decrease in the stigma,” he said. “For a long time, there was a stigma around mental health and mental illness, and people didn’t want to talk about it. The awareness around the general culture, I think, has led people to be more willing to seek help.”

Roberts treats patients who battle with different forms and factors of depression and other mental-related problems, including anxiety, bullying and substance abuse. He also conducts couples therapy, which he says can play a big part in the mental wellness of a marriage.

“I do a lot of work with veterans because they need help,” he said. “For whatever reason, vets are not willing to seek help and a lot of times are a little more comfortable with veterans ourselves. First responders and law enforcement are some of the populations that are a little less open to seeking out help.”

Roberts is a married father of four — ages 11, 5, 4 and 1 — with a fifth due in June. He also battles post-traumatic stress disorder and struggles with big crowds.

“Too much stimulus, too much crowd and too much noise adds to the struggle,” he said, working out of a small, room-temperature office with ambient lighting.

Even though his office can induce a sense of calm in his clients, Roberts knows the battle all too well as a PTSD patient and counselor.

Roberts points out a number of places for someone who sustains signs of mental illness to begin seeking help, naming Spindletop Center, Samaritan Counseling Center and one’s own primary care physician as examples. Roberts’ office is inside Ridgewood Baptist Church, 2920 Lake Arthur Dr.

Roberts does not prescribe medicine, adding that in Texas, medical doctors, psychiatrists, nurse practitioners and physician assistants are licensed to do that.

“Sometimes we need to have a wraparound approach and incorporate the primary care physician or a psychiatrist to make sure those needs are taken care of when they’re needed,” he said. “Sometimes, individuals will start with psychiatry because they know what they’re facing will require medication management, and the psychiatrist will encourage them to pursue counseling in conjunction with that management. It’s really a number of pathways.”

Many times, loved ones and other networks of support will assist those who are affected in identifying that help is needed, Roberts adds. He encourages anyone who needs help to begin talking with someone he or she is most comfortable with.

“If they’re more comfortable talking to their primary care physician because they’ve known the guy or lady for years, go talk to them,” he said. “They’re going to know who to refer you to if counseling is needed.”

Sonia Mouton was 9 months pregnant with her third child when she got a craving for Jack-in-the-Box in late November.... read more