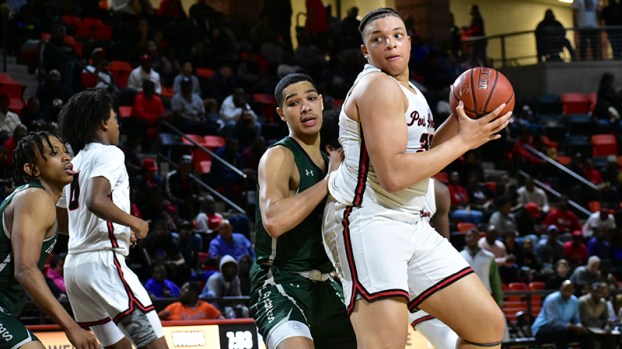 Kenneth Lofton Jr. (35) of Memorial spins off Cameron Collins of Hightower during the second half Friday in La Porte. (l.C. Murrell/The News) 2-28-20

BOYS BASKETBALL AREA ROUND: No. 7 Titans find no answer for Griggs, No. 2 Hurricanes

LA PORTE — The gym that was so good to Memorial’s boys basketball team the past two years did not bring the Titans any magic this time.

Sophomore guard Bryce Griggs exploded for 17 of his 25 points and helped second-ranked Fort Bend Hightower score a 70-57 victory over the seventh-ranked Titans on Friday in the area round of the 5A playoffs. Memorial (29-7) had won its previous two area round games at La Porte High School, defeating Shadow Creek both times. 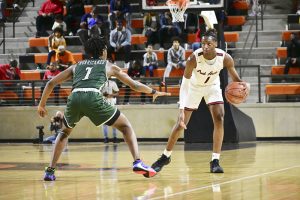 Amaree Abram of Memorial runs a play as Kristopher O’Neal of Hightower defends during the second half Friday in La Porte. (I.C. Murrell/The News) 2-28-20

The Titans led by as many as much as 20-17 with 4:29 left in the second quarter as center Kenneth Lofton Jr. was continuing to warm up offensively. Lofton had 24 points in his final varsity game, while sophomore Amaree Abram led the Titans with 25.

Hightower (30-5) will take on Crosby in the 5A Region III quarterfinal. Memorial suffered its earliest exit in the UIL playoffs since 2017, when it fell to Fort Bend Marshall at North Shore High. The Titans won the 2018 state championship, and both they and Hightower reached the Region III semifinals last year.

Lofton willed Memorial from a 16-9 deficit and finished the first half with 10 points. But Ja Robertson, a 6-foot-8 forward, scored six of the Hurricanes’ final eight points before half to power the Missouri City-based team to a 30-28 halftime lead.

Memorial was up 32-31 before Griggs — who was held to eight first-half points — engineered a 21-6 run going into the fourth quarter. 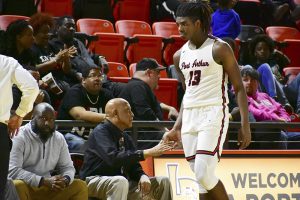 Memorial forward Nate Clover walks to the bench after fouling out as assistant coach Dwight Scypion gives him “five” late in Friday’s area round game against Hightower. (I.C. Murrell/The News) 2-28-20

Sophomore Jaylon Guilbeau is getting looks from several colleges hoping to recruit him for their football programs, but before he... read more