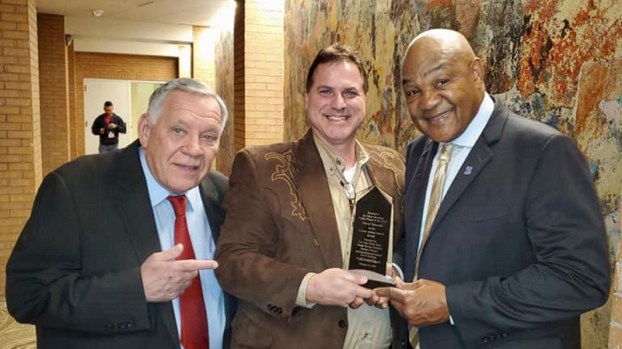 NEDERLAND — He’s been dubbed the “Most Awarded Fiddle Player in the USA” and now David Varnado has another accolade to add to his list — Career Achievement Award.

What makes this different is the source — the award was presented by two-time world heavyweight champion George Foreman and entertainment producer David Stallings, both of whom are fans of Varnado.

The award was presented last week at the Fredonia Hotel and Convention Center in Nacogdoches.

Varnado, a Port Arthur native and Nederland resident, said the whole thing made him feel “like world champ.”

“I got the call on a Thursday evening at 8:30 p.m.,” Varnado said, adding the caller asked if he was familiar with George Foreman.

The caller, entertainment producer David Stallings, is also known as Willie P. Richardson — a prank phone calling alter ego to which he has numerous CDs. Varnado wondered if all of this was a prank.

“I said is this David Stallings or is it Willie P. Richardson and he said ‘I can be,’” Varnado said.

The men got to talking and that’s when he learned Stallings was a longtime fan and had kept up with his career and in doing so introduced Varnado’s music to another Texan, George Foreman.

Foreman, he was told, was a fan of his music. 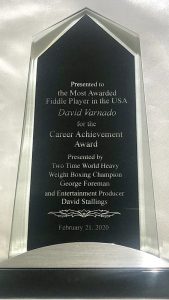 David Varnado was presented with a career achievement award.

Varnado already has a place in the Museum of the Gulf Coast for his musical contributions, so when he decided to make the trip to Nacogdoches he asked the museum’s director Tom Neal to come along.

The event was held during a special program put on by Stallings with a live conversation with Foreman, who spoke of his life, career, of being a businessman and a minister, Neal said.

“The award is one of a kind,” Neal said. “My goodness, look a the people who stepped up to do this. How interesting that our David Varnado and his journey inspired them to express their appreciation for what David has done and wanted to acknowledge him in some way.”

Varnado began playing the fiddle at the age of 4 and by 14 he was playing at local joints such as the Boudain Hut. Rufus Thibodeaux was his mentor and teacher from ages 12 to 17. Thibodeaux was nicknamed the King of the Cajun Fiddlers.

Varnado, who started out locally and in Louisiana, went on to play in Nashville and the Grand Opry, performing with Loretta Lynn, Ty England, who worked with Garth Brooks, Johnny Paycheck, Neil McCoy, Trick Pony and George Jones, among others.

He plans to donate the award along with an 8×10 photo of him with Stallings and Foreman to the Museum to be placed in his exhibit.