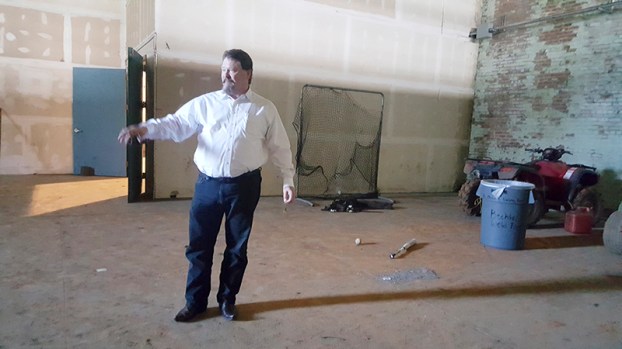 Ben Stafford, Ph.D., dean of workforce and continuing education at Lamar State College Port Arthur, points out areas inside the old armory building that will be used to train craftsmen. (Mary Meaux/The News)

“If you’re not a craft trainer, you’d think that’s ridiculous, that’s just an open warehouse, it’s useless. But if you’re going to train craftsmen, this is better than gold,” said Ben Stafford, Ph.D., dean of workforce and continuing education at LSCPA.

Sempra selected Bechtel, an engineering, construction and project management company, as contractor for the Port Arthur liquefaction project. And for this they have specific workforce needs.

“There are five different apprenticeships for their work on the Sempra LNG buildout. We will be training electricians, instrument technicians, advanced riggers, pipefitters and structural steel workers,” Stafford said of the partnership between LSCPA and Bechtel.

LSCPA has been working with Bechtel on preparation for two years, he said. 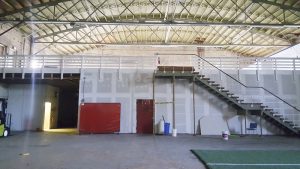 An area inside the old armory building that will be used for training and classroom space.

Stafford expounded on the idea of having the facility available for training of various crafts.

Pipefitters typically train on a steel table with a model that shows them how to join pipe. Now imagine a 6-inch (diameter) steel pipe hung on a pipe rack 30 feet in the air just like at one of the refineries, he said.

A teacher can get on a forklift and bring in a 300-gallon vessel and an industrial pump and the students actually do pipefitting. They will build it, fire it up, pressure test it, check for leaks and dissemble it.

“I don’t know of anything like this in Texas on this scale,” Stafford said.

There is already a welding shop in the building with booths much like a fabrication shop — and that’s one of the complaints he hears from employers. While there are jobs in fab shops, refineries need people trained to work in a refinery environment. To make money in welding in this area “you’re going to weld high or you’re going to weld tight.”

And that’s where the armory advantage comes in.

A catwalk will be suspended from the ceiling at about 28 feet, and the student will climb the I-beam and weld. Or they will go to one of the landings, tie off and be suspended to weld just as it would be done off a tower in a refinery setting.

“All of a sudden, instead of welding in a booth, I can teach all kinds of high level safety, high level welding and even suspended welding,” Stafford said.

A second catwalk will be added at the 28-foot height and a box added so the welder can lie down and crawl to a space about 18 to 24 inches tall to weld in a confined space — which is like welding between the two decks of a ship.

These two ways of training — high and tight — are what industry needs, Stafford said.

In addition there will be classrooms, offices, storage areas, restrooms and more. Stafford said the addition of the industrial work inside would not displace the ladies’ softball areas.

There will also be a 5,000-square foot building constructed at the front of the armory that could be left entirely open or hold seating for about 150 students. It could also be halved or lopped into four sections.

The land the old armory sits on has been property of the college for years but the footprint used has some blurred lines. The Port of Port Arthur owns the sundial monument at the front of the armory, and its commissioners are expected to vote and possibly approve deeding over the sliver of land to the college.

Stafford said LSCPA would maintain the monument and it would not be harmed.

Jefferson County Commissioners recently approved deeding over a piece of property but soon learned there was an issue with the deed and an accurate survey is needed, Fred Jackson, assistant to Jefferson County Jeff Branick said.

The piece of land is only about 0.4 acre and is a small piece of an entire tract, he added. The commissioners and judge are all in agreement in deeding over the land to the college.

Stafford sees a steady flow of students for the crafts training between Sempra and Golden Pass LNG, which also has a major project in the works.

Currently LSCPA is working with BrandSafway Scaffolding Systems, who needs about 15 students a month, which equates to 180 per year in their scaffolding apprenticeship. Then, if LSCPA sees 40 to 60 students in each of the five apprenticeships, that’s another 200 students, he said.

Right now work on the armory is in the architectural phase with a possible opening date next year.