The city of Port Arthur must soon determine how to allocate more than $1.15 million in Community Development Block Grants for 2020.

Representatives from nine nonprofit organizations addressed the city council during an open discussion Tuesday, seeking a combined $260,165 in federal funds. That, along with city departments’ requests for funding, totals $1,122,035 petitioned. Port Arthur is allocated $1,152,703 in CDBGs, which the Department of Housing an Urban Development provides to entitlement communities of 50,000 or more residents.

“Every year, the government provides us with CDBG allocation to make sure needs are being met as laid down by the criteria for entitlement communities,” City Manager Ron Burton said. “We utilize those funds in the community to make sure the needs of the underserved constituents are being served.”

It is not immediately known when the city will make final decisions on the grants.

Homeless shelter Port Cities Rescue Mission began accepting clients for the first time in three years in November. Ken Hill, the mission’s director, said a lack of local and federal funding previously prevented it from taking in more people, but added the mission has remained operable by renting apartments on its downtown campus.

Because funding has been unavailable, Port Cities has to decide who it can accept, Hill said. He asked the council to prioritize combating the problem of homelessness in the city.

“We view it as something unfortunate,” Councilman Harold Doucet said in response to Hill’s presentation. “We understand in order to help, we must have resources. We view it. We understand it.”

Doucet reminded Hill plenty of state and federal funds are available to support the mission as well.

Legacy executive director Vivian Ballou said an additional 30 homes in Port Arthur will be constructed to complete the final phase of the city’s redevelopment plan.

Councilwoman Charlotte Moses told Ballou that Legacy CDC is a vital component toward home ownership, adding the homes she visited were built well. Moses also agreed with Doucet’s comments that teaching homeownership should be done within the city’s housing assistance administration.

“When we invest this money, we need to make sure we give people the best opportunity to succeed,” Doucet said.

City departments are requesting a total of $861,870 in CDBGs. Burton said that the $301,870 sought for Port Arthur’s street repair program would go toward census tracts that have a high poverty level and is separate from the $14 million plan for remediation and reconstruction of streets that was approved last month.

The council did not hold a discussion on delinquent water utility accounts as originally listed on the agenda. Burton said listing that item was a mistake.

Port Arthur’s next council meeting is scheduled for 8:30 a.m. March 3. 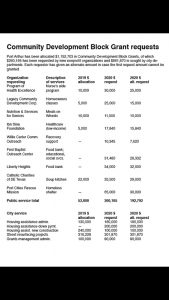