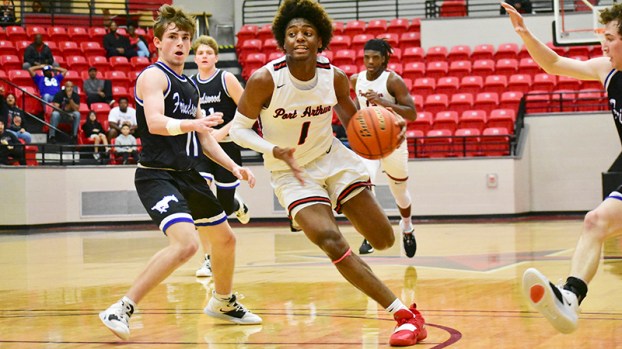 Amaree Abram of Memorial drives to the basket past Gracen McGregor of Friendswood on Tuesday at Lee College in Baytown. (I.C. Murrell/The News) 2-25-20

BAYTOWN — Seventh-ranked Memorial outscored Friendswood 34-9 in the second half and took a 62-35 victory at Lee College on Tuesday night in the bi-district round of the UIL 5A boys basketball playoffs.

Next for the District 21-5A co-champion Titans (29-6) is an area round meeting against No. 2-ranked Fort Bend Hightower, which beat Houston Sharpstown 87-56 on Monday. Memorial and Hightower will face off at 7 p.m. Friday at La Porte High School.

Amaree Abram continued a stellar sophomore season with 21 points, while Nate Clover added 17 for the Titans, who like Hightower reached the 5A Region III semifinals last season. Both picked up the scoring as Friendswood’s defense sagged on McDonald’s All-America finalist Kenneth Lofton Jr., who was held to four points.

Savion Skeete had seven points for the Mustangs (19-16), who were the fourth seed from District 22-5A. Three others each had six points.

Friendswood led by as much as 18-10 early in the second quarter, as Clover — another All-America candidate — had six of Memorial’s first eight points. Abram soon got going with drives to the basket on three straight possessions, eventually moving the Titans back in front, 19-18.

Lofton converted a breakaway dunk with 30 seconds left before halftime, but Luke Lipetska closed the Friendswood deficit to 28-26 just 12 seconds later on a reverse layup.

From there, the Titans’ defense held the Mustangs to two field goals the entire second half, one in each quarter.

In Deer Park, the Bulldogs stormed back from a 31-20 halftime deficit and earned a late defensive stop for their first playoff victory since 2014.

The Bulldogs (27-9) will face No. 3-ranked Shadow Creek at 7:30 p.m. Friday at Barbers Hill High School in Mont Belvieu.

Nederland, which shared the 21-5A championship with Memorial, closed the gap to 37-30 through three quarters and tied the game at 40 on a Joseph Gipson 3-pointer with 1:45 remaining. Tyler Jackson made a go-ahead free throw with 15 seconds left for Nederland.

“I think we were kind of due,” Bulldogs coach Brian English said. “The kids struggled offensively, but we guarded very well.”

The Bulldogs’ inside presence forced the Tornadoes (18-14) into an off-balance short-range attempt and unsuccessful putback before the final horn sounded.

In Baytown, the Indians (14-20) made their second consecutive UIL playoff appearance Tuesday, but left Goose Creek Memorial in defeat after leading the District 22-5A champion Cougars (22-10) at halftime, 21-20.

The Cougars gathered themselves and built a 48-36 lead with 5:35 left in the fourth quarter.

PNG whittled the lead down to 54-48 but could come no closer, as Crosby used free throws to put the game away.

In Warren, Sabine Pass’ bid for its first playoff victory since 2016 came up just short against the team they beat at the time, the Eagles.

The Sharks finished their season 17-17.

Track and field is part of Cyrus Jacobs’ family history. His mother and father, Shekerah and Cyrus Jacobs Sr., were... read more