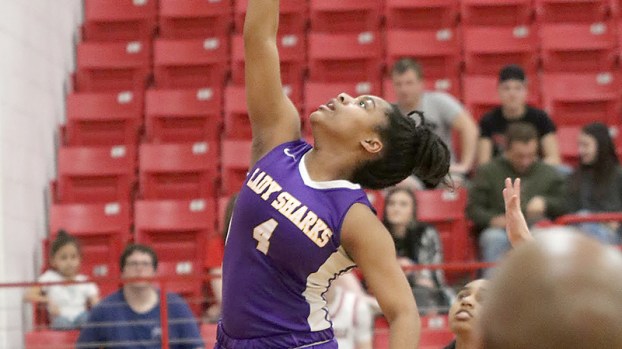 Charnel Jones said it was crazy when she first found out she was named District 24-2A’s MVP, particularly since she’s a freshman.

“Most people don’t expect a freshman to be able to get MVP over every other grade and out of the whole district,” she said. “For me to get that award, it means a lot because it shows all the work I put into basketball paid off.”

Sabine Pass head coach Cody Almond vouches for the level of work Jones puts into her game. He said the honor is well deserved.

“She put in the hours of practice,” he said. “Practice for her isn’t just with us. She goes home and shoots the ball, she watches basketball and she’s always asking for the tape to see what she can do better. She’s a very coachable kid that doesn’t take no for an answer. A couple of games, we were down big, and she took us to the next level to get us back into the game and get us the win.”

For the MVP honor, Jones is The Port Arthur News Girls Athlete of the Week.

Jones knew she wanted to do big things for the Lady Sharks when she played in her first game as a freshman. That was still a big moment for her young career.

“As a freshman I wanted to do a lot because most people don’t expect my talent ability to be as high just because I’m a freshman. I have a lot of hype around my name, and I just want to show people why I have it.”

Almond said he knew from everything he’d heard about Jones, from coaches as far back as her time in elementary school, that she was going to be a big part of the Sharks’ squad.

“I watched her in middle school, and she’d score 25 or 30 every game,” Almond said. “It was like she was the whole team and they were winning, and I knew when she got to high school, freshman or not, she was going to be doing that for us. It’s a great thing to have. She’s a great kid to have. I knew she was going to be something special.”

For Jones, basketball seems to be more than a hobby. It’s an ambition.

“I’ve always wanted basketball to be my sport,” she said. “I want to go far in basketball and possibly play professionally in the future, because I just have a love of basketball that most people don’t have. I see the court differently than most people do. I always try to help people out. I try to get everybody involved. It’s just the dedication for the sport that makes me different from everybody else.”

It wasn’t just Jones that brought the Sharks success. Jones says this year’s team had a level of chemistry that hadn’t been seen before, and a big part of that was due to Almond’s coaching.

“He’s an amazing coach, honestly,” she said. “In practice we do a lot of things that help us in the games, and we also have a lot of fun doing it. He brings a lot of chemistry to us, and he always makes sure we’re having fun. Everything we do, he lets us add our input into it, so when we do the drills, we aren’t bored with it. That really helped us go far this year, winning district, being close to undefeated in district. It means a lot that he’s here for us.”