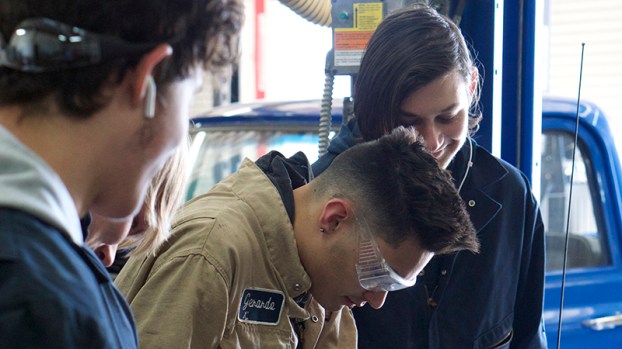 A group of automotive students at Port Neches-Groves High School work on a car during class Friday. (Cassandra Jenkins/The News)

PORT NECHES — John Guerrero has been in the automotive industry for more than 26 years. The Port Arthur native has been a mechanic, car salesman, technician, tire specialist and even car washer.

Last year, the 44-year-old ended up in the last place he expected his career would take him — a high school classroom. Guerrero is the new auto technician teacher at Port Neches-Groves High School.

“I love my job,” he said. “I’m a mechanic by trade. I love working on cars and I’m surprised to say I love teaching. I get asked a lot, ‘How come you’re not out there?’ when I talk about what I do and how long I’ve been doing it. I say, because to me, ‘This is a step up.’”

His sister is a teacher, and she sent him an email link for the job posting.

“I have a lot of knowledge of the trade, and when this job posting came up, it all fell into place,” Guerrero said. “The time, the communication, the emails, they were all there. This was the easiest job I ever got because there were no obstacles stopping me. It was just meant to be.”

Guerrero said after being appointed the position, he realized it was his chance to pay it back.

He admits to coming from the bottom, starting off with tire changes, oil changes, sweeping and mopping the dealership bathrooms.

“I still do all that today,” Guerrero said. “I don’t think it’s above me and I want to show my students that the foundation of a successful automotive career is hard work and desire.”

On the whiteboard in Guerrero’s classroom can be seen three written words: versatility, hard work and respect.

“I don’t just teach the skills on how to be a good mechanic, but how to be a good worker and a good individual,” he said. “One of the biggest things I teach here isn’t mechanical at all, but employability. How to do a proper handshake, how to sit up straight, what to wear, being an entrepreneur and things like that.”

Guerrero also teaches principles of manufacturing, Auto Body I and II. Students learn how to use basic hand tools, how to change flat tires, change oil, brakes, suspension, and do proper inspections.

Since his first year, both classes have almost doubled in size.

“It’s amazing and this is honestly the best job I’ve ever had,” he said. “I love it and I hope I can instill the same passion I have into one of them.”

Seniors Jack Smith and Damian Gonzalez said they have learned a lot from Guerrero’s class.

“Ever since Mr. G came to this class, he has already uplifted the program,” Smith said. “We do a lot more and he is very committed to what he does. He’s always making sure we do things right and do them the way they are supposed to be done.”

Gonzalez added that Guerrero is hardworking man and someone he looks up to.

“We learn what we are supposed to learn, and he also teaches us real world situations and things outside of automotive industry,” Gonzalez said.

Smith said he has been inspired to start a career in mechanics and is hoping to get into Universal Technical Institute next fall. Gonzalez said he would also like to make a career in the automotive industry. 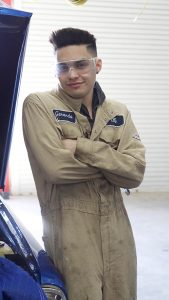 Senior Damian Gonzalez is a student in Auto Body I at PNG.

Guerrero’s favorite part about the job is the family atmosphere.

“I know all the mechanical aspects, but building a lesson plan and things like that, I’m new at it, but no matter what teacher I go to, they help me out tremendously,” Guerrero said.

“That’s one of the reasons I like to be here, it’s family-oriented and despite how many teachers are here, they all try to know my name. I’ve never had a job like this. I know this is where I’m meant to be.”