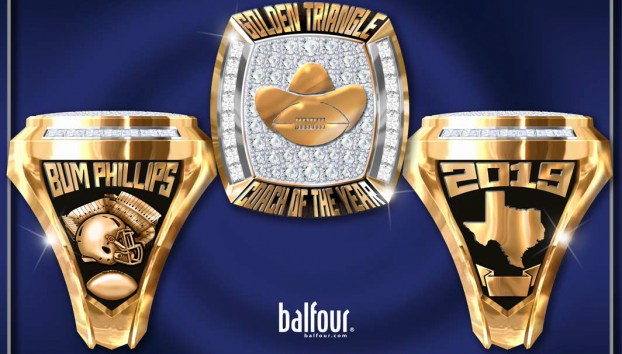 The design for the Bum Phillips Golden Triangle Football Coach of the Year ring made by Balfour. (Courtesy photo)

Silsbee’s Randy Smith has been chosen by a vote of area media as winner of the National Football Foundation’s inaugural Bum Phillips Golden Triangle Football Coach of the Year Award.

Smith led Silsbee to a 9-4 record and a second consecutive berth in the 4A state semifinals. Prior to Smith’s hiring at Silsbee in 2016, the Tigers had advanced to the semifinals only one time in school history.

To commemorate his selection, Smith will be presented a unique ring with Bum Phillips features crafted by Lee Briggs of Balfour. Wade Phillips will present the ring in ceremonies at the Museum of the Gulf Coast on Thursday, March 5 at 2 p.m.

Also expected to attend are Bum Phillips’ widow, Debbie Phillips, and his quarterback with the Oilers, Dan Pastorini.

The National Football Foundation has 120 chapters and 12,000 members nationwide and is seeking to establish a Golden Triangle chapter. Texas NFF chapters are currently located in Houston, Dallas, Austin and Lubbock.

The presentation, which will take place in the museum’s Sports Legends gallery, is open to the public.

The results from the Joe Williamson Relays at Port Neches-Groves High School on Thursday are below. Due to inclement weather,... read more