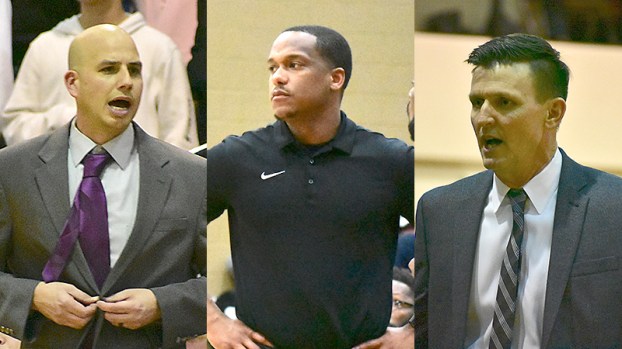 The Memorial Titans, Nederland Bulldogs and Port Neches-Groves Indians each face a District 22-5A opponent at 7 p.m. Tuesday at neutral locations for the bi-district round.

The Sabine Pass Sharks (17-16, 4-4 in 24-2A) also enter the playoffs, though they don’t yet know where, when or who they’ll be playing. District 23-2A teams West Sabine and Zavalla play a tiebreaker game today to determine seed placement before the bi-district matchups and locations are determined.

Nederland will travel to Deer Park High School to face its first playoff opponent, Galveston Ball. The Bulldogs (26-9, 11-1 in 21-5A) have won their last seven games and hope to keep riding their momentum.

“We’re playing well and we’ve got some kids stepping up playing with more confidence right now so it’s a good time to be playing at your best,” Nederland head coach Brian English said. “We won an overtime game at Barbers Hill, and I kind of think that turned us. We had a comeback and after that we played really well.”

Nederland and Memorial High School ended the regular season tied for first in District 21-5A, but the Bulldogs opted to accept the second seed in order to play Galveston Ball (18-13, 10-4 in District 22-5A), which English said his team had more familiarity. Last year, the Tornadoes were defeated in the first round by the Memorial Titans.

“We had seen them, we knew more about them. So there’s not much difference in the routes that you take. Our playoff path is a little more even,” English said.

He added that the team is gathering information on the Tornadoes, watching film and figuring out how they play and who their best players are.

“They’ve got some big kids and their guards are good,” he said. “At this time of the year most people you play are going to be pretty good. We’ve got to be ready to play.”

Memorial will play Friendswood at Lee College in Baytown. The Titans (28-6, 11-1 in 21-5A) are ranked seventh in Class 5A by the Texas Association of Basketball Coaches as of Feb. 17.

Like Nederland and Galveston Ball, Memorial head coach Alden Lewis says that the Titans are familiar with the Mustangs (14-15, 8-6 district). Last year Friendswood beat Nederland in the bi-district round before losing to Madison in the area round.

“That’s a sound team,” Lewis said. “They’re very disciplined, they play the game the right way. It’s another challenge for us. That’s a patient team and they’re going to run their stuff, they’re going to do exactly what the coaches tell them to do, so we’ve got to expect a good disciplined team over there and we’ve got to be prepared for that. Whoever’s going to be the most disciplined will pull out the win.”

Like all their games the Titans expect their robust defense to play a leading role on Tuesday.

“Every game, no matter who we play, our defense has to be there, especially with a team like this that runs a good offense,” Lewis said. They look to actually run their stuff and their system, so we’ve got to be able to defend and defend them well for a long period of time.

“We’re game planning for them and we’re working on that now, and hopefully by game time we’ll have everything ready to roll and looking for them to go.”

PNG heads to Goose Creek Memorial High School to face Crosby. The Indians (14-19, 5-7 in 21-5A) make their second consecutive playoff appearance and are facing the 22-5A district champion. Barbers Hill took out the Cougars in last year’s bi-district round.

“They’re a dangerous team,” PNG head coach Chris Smith said. “They’ve got some guards that are really good, they’re big, they’ve got two 6-6s that they start, and a big 6-8 that comes off the bench, so it’s going to be a big test for us, but I think we can control the tempo and keep them low scoring. I think we can give ourselves a chance.”

The Cougars (21-10, 12-2 in 22-5A) have a height advantage over the Indians, Smith says, and the team is going to have to rally together and all pitch in to help get rebounds and defend.

“We can’t just leave it to Khristian Curtis; he’s our leading rebounder,” Smith said. “We depended on him during district, but he’s going to have to get some help because he’s going to be outsized a little bit, taking on all five guys to help control the boards.”

Smith says that his team has the heart to play their best.

“I know one thing, we’re excited about it, the kids are fired up,” he said. “I know the kids aren’t ready for the season to be over with, so they’re going to give it their all to try to push forward into the next round.”

Going against elements: Runners only compete at PNG

The participants at the Joe Williamson Relays at Port Neches-Groves High School had to run through cold, rain and wind... read more