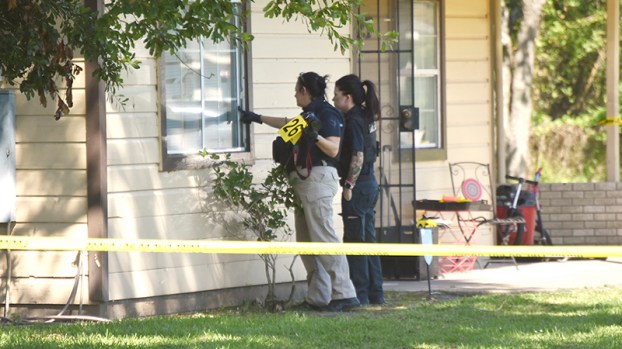 Port Arthur police crime scene technicians look for evidence at a home in the 5600 block of Grant Avenue that was struck by multiple bullets in July 2019 and a 4-year-old child was shot in the back. (File photo)

Recently released 2019 statistics for the city of Port Arthur show a drop in most major crimes.

Homicide has remained at a steady-ish rate with one exception; 2018 saw 13 homicides, one of which was manslaughter. In 2016 there were five homicides, there were six in 2017 and eight in 2019.

Police Chief Tim Duriso, who was hired in September 2018, said one homicide is too many.

Longtime resident Jody Holton, who works with the Port Arthur Neighborhood Action Council, believes the increase in rape cases might be a reflection of more people reporting the crime, saying women are more encouraged through public information and education to report rape rather than keep quiet.

Some crimes such as robberies are always going to happen, especially in areas where the economy is depressed, but good police work and better prevention are keys to the drop in numbers, she said.

Burglary has plummeted and she attributes this to higher police presence and the affordability of security cameras.

“Overall, I’m encouraged since Tim Duriso took over,” Holton said. “He has had a very hard job of rebuilding the police department, because it was completely decimated under Melvin (former Police Chief Patrick Melvin).

The PAPD, she added, has made a tremendous comeback and still has a ways to go to fill vacant slots.

“This man (Duriso) has brought so much to the city,” she said.

Melvin was hired to lead the department in September 2016 after the retirement of longtime Chief Mark Blanton. Controversy swirled around Melvin when members of the Port Arthur Police Union issued a vote of no confidence against him, alleging Melvin was the reason approximately 25 officers left the department and also finding fault in his leadership for other reasons. He resigned, or was forced out, in May 2018.

M.J. Ponsegrau, longtime resident, has been the victim of crime, especially in the days after Hurricane Harvey, but added there were times even before Harvey that he found himself wondering if Port Arthur even had a law enforcement organization.

“I realize this is discouraging, but not everyone is the victim of a major crime, and those suffering from minor incidents often find police response to be far less than worthwhile,” Ponsegrau said. “Because of this, reports of decreasing crime in Port Arthur don’t mean much when it comes to those on the opposite end of the food chain. I’m one of them.”

Ponsegrau said, when looking at the statistics, there are improvements in relation to some types of major crimes but others need more work. Then again, he said, he may be too skeptical.

Though he hasn’t had the opportunity to meet Duriso face-to-face he sincerely hopes he is successful in designing a law enforcement program that best serves the people of Port Arthur.

Former mayor Deloris “Bobbie” Prince agreed with Holton in that Duriso is doing a good job but also that citizens need to be responsible for their own safety and not be complacent. There are crimes that could be prevented if citizens called police when they see something suspicious.

Price is a member of the Police Chief’s Advisory Committee, which began under a different administration.

“We started under Melvin; however, Chief Duriso is working with us as we try to bridge the gap between the police department and the public,” Prince said. “He needs to have the citizens’ participation, their help, because we have been blessed with a good police chief. We truly have.”

Wanda Bodden spent a long career as a nail technician for Seche International. The company is known for its quick-dry... read more