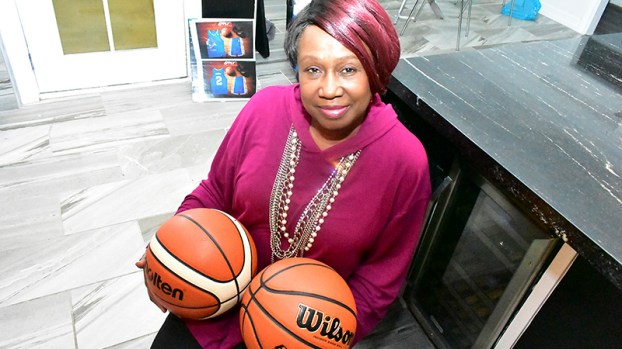 Wanda Bodden spent a long career as a nail technician for Seche International. The company is known for its quick-dry topcoat for nails.

“That job afforded me to travel the world,” she said. “I traveled to London, Hong Kong and Tokyo.”

Traveling internationally helped the Port Arthur woman, who now pastors Church of the Overflow in Groves, expand the way she thinks.

A married mother of three boys, two of whom played high school basketball, and grandmother to a Memorial High School senior guard, Bodden used her love for the sport to establish a sports festival that will go into its second year this summer. 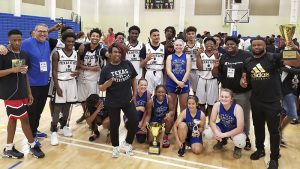 The Texas Elite One and Southeast Texas Elite teams, both based in Port Arthur, celebrate their Cayman Sports Festival championships. (Courtesy photo) 7-20-19

Last year, Bodden took a pair of basketball teams — one boys and one girls — to the Cayman Islands for a round-robin tournament aimed at giving teens from different territories the opportunity to interact. Both of the Texas teams won their round-robin championships, taking on teams from Bermuda and the Caymans.

“What they found out, when they travel, they’re just teenagers,” Bodden said. “They have an accent, but they go through the same things and the same issues. They have the same likes and dislikes.”

It’s one of a number of tournaments Bodden has organized in the past five years, many of them held locally. What was known as the Cayman Islands Sports Festival is now Bring Dat Smoke.

“When I got ready to do the tournaments, it was all because I saw a need for the kids who couldn’t afford to be in the AAU. They loved it,” Bodden said.

The festival was her vision for re-establishing connections between Port Arthur and its sister territory, the Cayman Islands. Bodden’s father-in-law is from Grand Cayman, one of the territory’s three islands.

The three-day festival, which Bodden launched with then-Cayman sports department director Collin Anglin, was held last summer in the Cayman capital of George Town. This year’s renewal is scheduled for June 24-27 at Memorial High School. 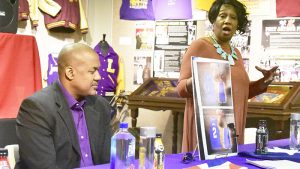 Wando Bodden speaks as the Cayman Islands’ director of sports, Collin Anglin, listens during a Feb. 9, 2019, meet-and-greet at the Museum of the Gulf Coast. (I.C. Murrell/The News)

Initial plans for the festival included boxing and track and field, but the other territories’ sports departments could not find suitable opponents for the Port Arthur-area athletes, Bodden said. She’s writing to sports ministries in Trinidad & Tobago and the Bahamas in hopes of bringing their basketball and soccer teams to Port Arthur.

“It’s a track record,” Bodden said. “Sometimes, people watch to see if it’s really going to happen. Some people don’t want it to happen. Some people don’t think it’ll ever happen. That was all proven wrong. We went over there. Not only did we go over there and play, but we dominated there. We played some good teams. In fact, in the championship game, we tied the team six times but we came up with the win.”

Ahmaal Bodden, one of Wanda’s three sons, said it’s awe-inspiring for a young person to travel outside the U.S. and adapt to FIBA rules. FIBA is the acronym for the French name of the International Basketball Federation, the global governing body for basketball.

“FIBA is different for the kids,” he said. “To make the adjustment, and to be successful as they were, they have a high basketball acumen.”

One girl from Texas played through a broken hand in the festival, helping her team win all three games against the Caymans.

“This kid would go to the sidelines and get some Advil, might sit down three minutes and get back into the game,” Wanda Bodden said. “We just prevailed. We put forth great effort. We also showed the Cayman Islands we were invested in what we said we were going to do. We didn’t bring any sloppy seconds. We had high-quality players full of energy. Great kids. We didn’t have any disciplinary problems. [They were] well-behaved. Great coaching.”

Wanda Bodden hosted a meeting earlier this month at the Museum of the Gulf Coast to help familiarize others with the festival. Guests included Victor O’Garro, a former professional basketball player from Trinidad who is technical director for the Cayman Islands Basketball Association, and his son-in-law Anglin, who now runs a consulting firm.

Bring Dat Smoke is accepting registration for any boys or girls team, ages 13-18. Registration is $450 for a team of 10, with a multiple team discount available. To register, Bodden can be reached at 409-332-0269 or Wanda-Bodden@hotmail.com.

“I’d love to see the people in this area get behind these kids and sponsor some kids,” she said. “Some of the kids that are playing on the super team, sometimes, they don’t have the $1,500 to $1,800 to be on an AAU team or traveling team or anywhere else. They’re great. They’re good. They just don’t have the finances. If we can get people to commit and sponsor a kid, even if it’s $100 to each kid, they get to display their talents. They get to meet people from other cultures.”

Editor’s note: This is the third in a four-part series spotlighting African American leaders as part of our Black History Month coverage

GROVES — A Port Arthur couple has been indicted for a violent January robbery that police said targeted a Groves... read more