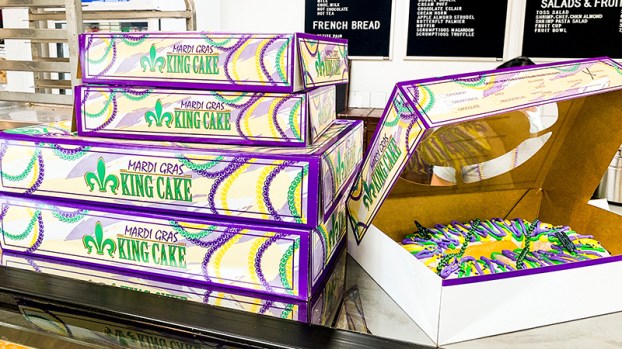 NEDERLAND — Southeast Texas is no stranger to king cake, an oval-shaped delicacy that is as rich in history as it is in flavor.

The sweet, circular pastry is the centerpiece of the Catholic celebration known as Epiphany, celebrated on Jan. 6 and lasting until Fat Tuesday. The dough is twisted into a ring and often decorated in New Orleans royal colors of green, purple and gold.

Golden Croissant, located at 2904 FM 365 in Nederland, has been dishing out traditional and non-traditional king cakes to the Golden Triangle for more than 20 years. 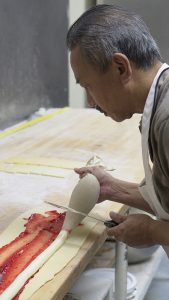 Hung Lee fills a strawberry and cream cheese king cake in the bakery.

Anita Nguyen, co-owner of the bakery, said what makes their cakes special is flavor, customization and freshness.

“The freshness of it plays a huge role,” she said. “Everyone around here has good king cake, but we make so many that you can get it pulled right out of the oven. The quality and the freshness, plus your customization are what really sets us apart.”

A typical king cake is twisted into a round oval-shaped ring and topped with icing, sometimes candied fruit and colored sugar, although Nguyen said Golden Croissant swaps the sugar for more icing and buttercream.

“A lot of places add the sugar icing and then sanding sugar,” she said. “It’s really gritty for people, so we customized it to where people can enjoy it a little more. We still add the crunch with the sprinkles, but it’s not like eating sand. 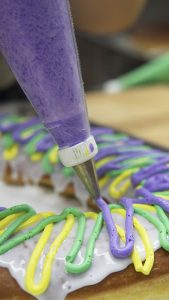 “The first thing people ask us is, ‘Do y’all put that gritty sugar on top?’ We don’t. We add our buttercream and a few sprinkles.”

“Trendy things is what’s new,” Nguyen said. “People want something different, a twist on things. Especially with Southeast Texas, everything is different. We want to come up with something that no one will be able to copy.”

Golden Croissant makes approximately a hundred cakes a day, selling thousands during the Mardi Gras season between January and March.

Nguyen said a lot of their popularity comes from word of mouth. 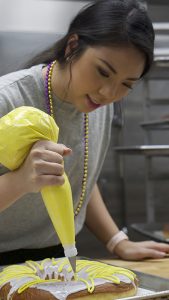 “We don’t advertise the king cakes a lot,” she said. “So what really helps us sell more are our customers talking about how good they are. It’s all about the people.”

Jody Perricone Holton from Port Arthur said “the boudin king cake is by far the best I have eaten.”

Crystal Lege from Nederland said Golden Croissant has the best king cake because of it’s freshness and filling.

“For our rehearsal dinner some years ago, we bought up king cakes from several places and everyone agreed the one from Golden Croissant was by far the best,” she said. “They do a great job with tasty filling and not overly sweet icing. My personal favorite is the Bavarion cream one.”

Nguyen said her favorite part of baking a king cake is deciding where to place the plastic baby, a symbol of luck and prosperity to whoever finds it in their slice of cake.

“You get play God a little bit,” she laughed. “Everyone always asks where we put the baby, it’s always so funny because no one really knows how where or who will find it.”

For more information or to order a custom king cake, call Anita Nguyen at 409-727-5399 or visit Golden Croissant on Facebook.

Should parks be sold? Port Arthur planning to rehabilitate others if voters approve

The city of Port Arthur is planning to sell six of its 35 parks and hopes to receive funding to... read more