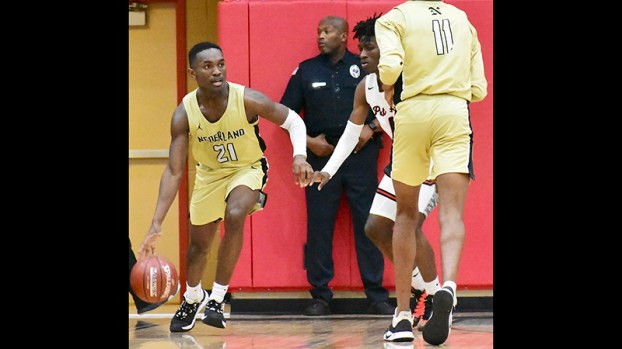 Joseph Gipson made only one 3-point shot during the first half. It was in the first quarter, when Nederland took a 9-8 lead.

Memorial closed the first half on a running 3-point buzzer-beater by Kenneth Lofton Jr. to spark a 13-0 run, putting Gipson and the Bulldogs on their heels as they tried to avoid their second loss to the Titans in district play. Once Nederland fell behind 32-16, Gipson went right to work.

“I knew in that first half I wasn’t shooting it like how I wanted to,” the junior guard said. “I work hard at it every day. I don’t take any shot for granted. That’s my craft. I thank Jesus for it.”

Keeping the faith, Gipson knocked down four more 3s and keyed a 23-0 Bulldog rally en route to a 46-43 win that denied the Titans the outright District 21-5A championship. Gipson’s efforts — 15 points all from behind the arc — earned him The News Boys Athlete of the Week honor.

“I want to give a shout out to D-Zach [Derrick Zachary],” Gipson said. “He helped me get my 3-point shot right, but we’re not satisfied. We still have one game left, and I’m pretty sure we’ve got to play them again.”

Should the Bulldogs win tonight, it remains to be seen how the No. 1 seed would be determined. Teams usually play a tiebreaker game to determine seeding, but Nederland coach Brian English isn’t sure whether such a game would be played or both his team and Memorial would agree to accept one of the two playoff draws for fear of risking injury in an extra game. A coin toss could also determine the top seed.

But on Friday, the Bulldogs drew confidence from beating the fourth-ranked team in 5A. The Bulldogs had lost in seven straight meetings against the Titans, having last won in the series in December 2015.

“It had been a little while,” English said. “We were due, I think.”

With at least a share of the district crown for the fourth year in a row, Memorial (28-6, 11-1 in 21-5A) seemed well on its way for a second outright title since 2018, the year the Titans won the 5A state championship. Then Nederland’s comeback happened.

Memorial saw a 16-game winning streak snap and suffered its first loss since Dec. 20, when Beaumont United won 58-56 in Port Arthur. The Titans, who finished their regular season, are 49-3 in district games since moving down to 5A in 2016.

By the time the third period ended, Nederland had gone from not scoring during the first 5 minutes of the quarter to pulling within 32-30.

Tyler Jackson made 3 of 4 free throws in the first 32 seconds of the fourth quarter to give the Bulldogs their first lead, 33-32, since the 6:50 mark of the second quarter.

Amaree Abram, who finished with 20 points, tied the game on a 3 with 48 seconds left, but Texas A&M signee Hayden Hefner drew a reach-in foul 14 seconds later and hit the second of two free throws to put the Bulldogs back ahead. Gipson rebounded a missed corner 3 by Memorial’s Colton Mitchell and, coming out of a timeout, Jackson was sent to the free-throw line, where he made a pair of shots.

Abram had two chances to send the game to overtime. He missed a running 3 on the way down with 1.2 seconds left, but after the ball last touched a Nederland player going out of bounds, he took the inbound pass and only hit the backboard from the same spot, just outside the top of the key.

Free throws came back to haunt the Titans. They shot 6 for 16, including 1 for 7 in the fourth quarter. Nederland made 15 of 26.

Jackson finished with 10 points (he was 6 for 7 in free throws), Josh Seymour had seven (4 for 4 at the line) and Hefner was held to six points. Lofton scored 19 for the Titans.

“The kids that shot the ball well in the second half, hey, they work on it all the time,” English said. “It was just their turn. They stepped up in a big moment tonight. I’m proud of them.”

GIRLS ATHLETE OF THE WEEK — Much to celebrate: PNG’s Amonti Edwards gets No. 2 seed Indians going

Amonti Edwards’ parents often tell her to save the celebrations until the game is over. Those celebrations, though, do wonders... read more