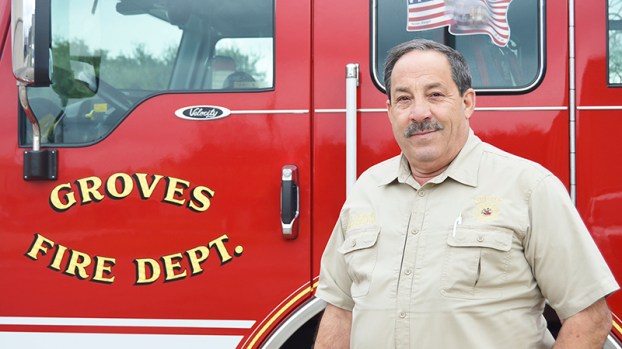 Groves Fire Chief Dale Jackson is set to retire after a 46-year career, 30 of which he was chief. (Mary Meaux/The News)

GROVES — Dale Jackson was just a teenager when he saw a large house fire a few blocks from his home and went to watch the commotion.

When it was over, he saw the firemen picking up the hose and went over and asked if he could help. Later they asked if he would be interested in being part of a new Junior Firefighter program that was kicking off in Groves. He talked with some friends about it, got the OK from his parents, and the rest is history.

Now, 46 years after his time as a Junior Firefighter, 30 of which he has served as fire chief, he will retire.

Jackson, 63, has led a storied career from the days of fighting fires without air packs — they weren’t part of the gear back then — to dealing with almost every type of disaster.

“My job starts at 8 o’clock in the morning. There is no telling what’s going to happen that day and that is part of the excitement. There ain’t been a day that I didn’t want to get up and come to work, never,” Jackson said from his office recently. “And because you never know what’s going to happen, what’s going to be thrown at you. Some days it’s the regular routine, and the next thing you know you’re at an explosion… you’re getting challenged all the time by these events that happen and in the end our goal is to go out there and protect life and property with life coming first.” 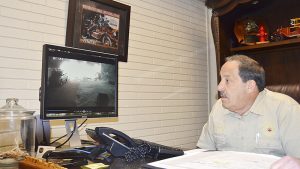 Retiring Groves Fire Chief Dale Jackson looks at a video from May 16, 2018, during a house fire in the 3200 block of Allison Avenue. (Mary Meaux/The News)

There are plenty of memorable moments in his long career but one that shows the dangers of the job and the triumph of saving lives came on May 16, 2018, during a house fire on Allison Avenue.

Jackson brought up the video from the scene showing police and fire working to get inside the blazing home, where a 12-year-old handicapped boy was trapped in a back bedroom.

Tense moments passed as a horn was sounded two separate times, signaling for the two firefighters inside to get out immediately as the structure was about to collapse. “Back out. Back out” was heard coming from the engine, making the situation even more dire.

“House fires, that’s what we do every day. I could show you that 100 times over. The timing of getting the kid out and the house collapsing, we have had that happen before,” he said.

This is where training and instinct come together for firefighters — they raced inside without hesitation. The boy had some injuries but recovered, though the house was heavily damaged.

Groves City Manager D.E. Sosa said he’s been with the city for 17 years. During that time there have been five disasters with Jackson as emergency management coordinator.

“I can’t say enough about the chief. I’m happy he’s able to retire. We’re going to miss him,” Sosa said.

Jackson has hired and trained all of the firefighters under his command, which is something that makes Sosa feel confident for the future.

“He’s versatile and a great, great emergency management coordinator,” Sosa said. “I’m happy for him but sad to see him go.”

“There was one particular incident where we responded to local industry, in Port Neches. We (Port Neches Fire Department) were already inside and Groves came as mutual aid. When (Jackson) pulled into the gate, the guard closed the gate on his brand new city car and it got a dent on the front fender,” Doise said.

So, when Jackson pointed out the dent, Doise went to his truck, got some 4X4 gauze and taped his business card over the dent.

The two shared some laughter over the incident and Doise said Jackson has a sense of humor like no other.

Doise, who retired in 2004, knows Jackson is dedicated.

“I’ve always thought the world of him and I always will,” he said. “He’s a firefighter’s firefighter. If something happens to you, you know he’ll be right beside you.”

Stephen Curran, who retired as Port Neches Fire Chief after Doise and also worked at the Port Arthur Fire Department, said the two went to the police academy together — a requirement for those serving as fire marshal. The police cadets called the two “water chunkers” because they were with the fire department. Curran said the two showed up most of the cadets, though.

“Dale has been by my side during my whole career just like he has with his men in the Groves Fire Department,” Curran said. “We jointly worked on some very tough issues throughout the years, which I will always cherish. I couldn’t have had any success without it. I’ll always thank him for our work and personal relationships during those years.” 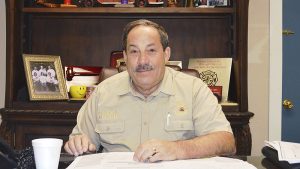 He’s seen it all, well almost

Jackson well knows the challenges of being emergency management coordinator. He has guided the city through hurricanes, floods, wind events, an ice storm and even a small tornado. Everything except or a tsunami, he said.

He has checked out the sister cities Groves has coordinated with through the years to shelter residents, visiting, viewing and talking with officials to make sure he is confident he can send his people there and they will be taken care of properly.

He understands the problems with evacuation routes and staggered timing of departures.

Some success has been made on plans to help alleviate some of the routes with four-lane areas on U.S. 96 and U.S. 69. In the end, if everybody tries to leave at the same time it’s not going to work.

Jackson isn’t one to shy away from work and admits he’s a bit hardheaded. Last year he had a broken foot and managed to go back to the office where he stubbornly made calls. When he went back to the doctor, he found out it was worse.

He also worked through not one but two bouts of cancer.

Beginning in 2000 he had bladder cancer, which he dealt with for several years. He considers himself lucky, as this is “one of the easiest cancers to fix.” This is when he quit smoking.

He was diagnosed with colon cancer in 2015, which was an eye opener. He went through chemotherapy treatments in Houston and back to work, sometimes the same day.

“So far everything’s great. I’m doing what I’m supposed to be doing,” he said. “Hopefully when I hit five years I’ll go in the survivor program.”

These are two of the five cancers typically associated with firefighters, he said, adding in the early days they didn’t use air packs because they weren’t available at the time. 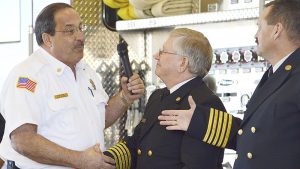 Jackson has plans for traveling with his wife, Sheryl, spending time with the kids and grandchildren.

Plus now he can take time off during the summer —something he hasn’t done in a long time because that’s when tropical disturbances typically happen.

“I did rent a beach home, then Allison hit so I had to come back and we lost that money but we knew we were taking a chance,” he said of the June 2001 tropical storm that struck Houston.

Jackson has some projects lined up at home, enjoys woodworking and has eight grandchildren — and while he will miss the camaraderie, he’s ready for retirement at the end of the month.

Longtime firefighter Lance Billeaud will take over as the new chief.

Port Neches community rallying for day of prayer on Sunday