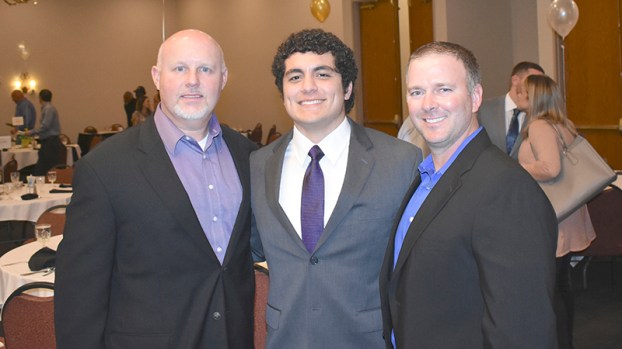 Among the finalists was Port Neches-Groves senior free safety Santiago Agudelo, who during this previous season made 74 tackles, 60 of which were solo and 12 of which were for losses, along with three sacks, three forced fumbles and one broken up pass.

Agudelo said it was an honor to be counted among the athletes recognized for the Willie Ray Smith Award. 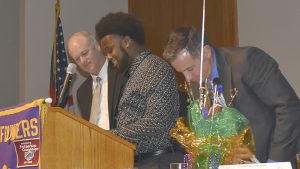 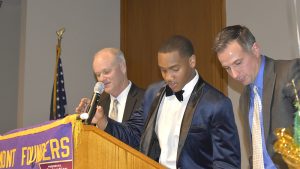 Tyrone Brown walks to the podium to accept the Willie Ray Smith Defensive Player of the Year award Monday.

That hard work was the key to his success, Agudelo said.

“When nobody’s watching you’ve got to be trying your hardest and do whatever it takes to get to the top,” he said. “That’s what I did. I was always working and always trying my hardest.”

PNG head football coach Brandon Faircloth said the Indians were blessed to have Agudelo among their ranks, along with the other players that have gone through the PNG program that have also been recognized or nominated for the award.

Roschon Johnson, former PNG quarterback and three-time Port Arthur News Super Team MVP who now plays for the University of Texas, was named the Willie Ray Smith offensive player of the year for the 2017 season.

“We’ve been very blessed to have quite a few players be finalists,” Faircloth said. “Santiago is just another one in a great line of guys that we’ve been very blessed to coach. He was a three-year starter for us, All-District every year, Port Arthur News Super Team, incredible player, coach on the field, and a guy you can’t replace, honestly. He’s not only a wonderful player but a great student, highly intelligent, a great leader and we’re really going to miss him.”

Monday’s banquet also featured keynote speaker Damon West, former quarterback for the University of North Texas, who spoke to the group about his addiction to methamphetamines, his arrest and imprisonment and the story of how he changed his life around to become a motivational speaker, author, legal assistant at the Provost Umphrey Law Firm and adjunct professor of criminal justice at the University of Houston Downtown.

West is the author of The Change Agent: How a Former College QU Sentenced to Life in Prison Transformed His World, and is the co-author along with motivational speaker Jon Gordon of a recent book The Coffee Bean: A Simple Lesson to Create Positive Change.

West spoke on Monday of advice he received while in county jail from a fellow inmate, who told West to act like the coffee bean when placed into a pot of hot water, the water referencing West’s imminent transfer to a Texas prison to serve his sentence.

While carrots turn soft in hot water and eggs harden on the inside, West was encouraged to imitate the coffee bean while in prison, to resist hardening or softening and instead change the hot water around him into something better like coffee.

West has taken his story to several athletics programs, speaking to players at Clemson, Alabama, Georgia, Texas and other schools and businesses.