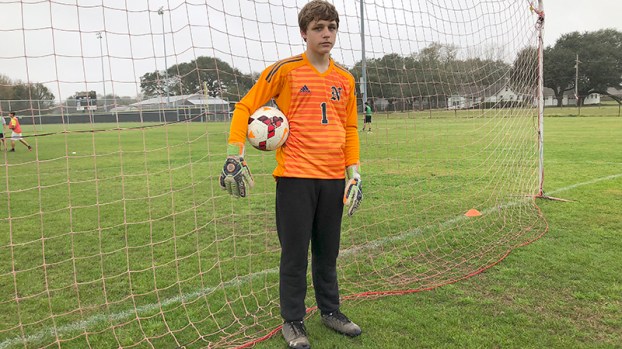 Boys Athlete of the Week: Freshman Reeve Barrow holds Indians back for Bulldogs

The Nederland Bulldogs were in need of a new goalkeeper, and while several varsity players would have been capable, they also would no longer be contributing on the field. The Bulldogs turned to freshman Reeve Barrow.

“I’ve played a couple of JV games, but it’s a totally different story than JV,” Barrow said of his first varsity game. “Varsity is just a different level of competitiveness and it’s just harder. You can go into your first varsity game nervous because you don’t know whether it’s going to be like what you’ve played before. But it turned out that it’s pretty hard.”

Nederland head coach Keith Barrow said it was probably a good thing his nephew Reeve didn’t have much time to overthink before his first varsity game, because it wasn’t just his first game at the varsity level. It was also against archrival Port Neches-Groves.

“Because it was PNG, it was really intense,” Reeve said. “It was also nerve-wracking because it was my first game there, so that put a little more pressure. It was fun but it was really nerve-wracking. You don’t think about what you’re doing, you just react to whatever’s happening, or whatever’s in front of you, you don’t think about what you’re going to do.”

Reeve stayed steady, keeping the Indians from scoring throughout regulation en route to a 4-2 shootout victory for the Bulldogs. For his solid performance, he’s named The Port Arthur News Boys Athlete of the Week.

“He played a little soccer growing up. He understands the game pretty well,” Keith Barrow said. “I was very proud of the job he did on Friday night coming in as a freshman.”

Reeve plays multiple sports, including this year basketball and football, though he says he expects to focus mainly on soccer next year.

“There’s a chance that I could go back into football, but right now I’m looking forward to soccer this year,” he said. “For me, it’s a better environment than football and basketball. I like the people that are here, everybody is nice. I see myself having a better future in soccer.”

Coach Barrow was hoping Reeve would perform well, and his hope paid off.

“We did go to a tournament earlier in the year, the Waller tournament, and he got 20 minutes in one half and made a couple of good saves, so that christened him a little bit and got him to see the speed of the game,” Barrow said. “In practice, he’s gotten some good reps with the varsity guys. So he knows what’s at stake and what to expect in terms of some of the things the ball is going to do, the speed of the ball coming at you and the different curves. One thing I was worried about was the turf bounce, because we don’t have turf here yet. He had several he had to judge the short hop [on] and he came up on them early.”

Reeve said that, honestly, he wasn’t expecting to do as well as he did in his first varsity game. He expected to play mostly junior varsity this year and start fresh with varsity next year.

“If you’re going into a varsity game like me, I wouldn’t expect to have a perfect game, because it’s the first game with varsity, against PNG so it’s a lot of pressure,” he said. “But I stepped up to the occasion and did well.”

Nederland will travel to Cleveland for a 7 p.m. game tonight.