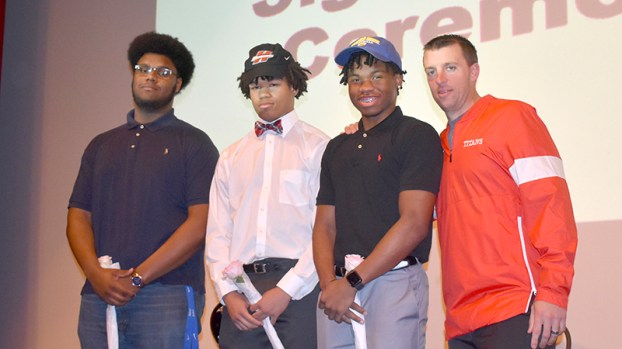 From left: Evan Kelly, Cam Smith, Jatavian Neal and Coach Brian Morgan stand together in the Memorial High School auditorium as the first Titans to sign to play football at the college level of 2020. (Brad Robichaux/The News)

Three of Memorial’s best sign on to play college football

Three Memorial Titans are taking the next step on the road of playing football during National Signing Day festivities in Port Arthur.

Evan Kelly, Jatavian Neal and Cam Smith signed their letters of intent Wednesday to play college football at their respective schools during a signing ceremony in the Memorial High School auditorium.

The three are the first among the Titans to commit to colleges, and head football coach Brian Morgan said a few others are in the process of making decisions on which schools to play for.

“We’ve got four or five that probably could have rushed to make a decision today, and I told them it was not important to be part of this ceremony — it was important to make the right decision,” Morgan said. “A couple have some visits coming up, and I want to make sure they make the right decision, because it’s a life-changing decision: where you go to school. We’re going to make sure to honor them when it’s time and when they make that decision.” 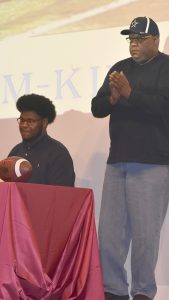 Evan Kelly signs his letter of intent to play football for Texas A&M-Kingsville.

Kelly will be attending Texas A&M-Kingsville, which he said was quite welcoming when he visited the campus.

“When I first stepped on campus this summer, I felt like I was at home,” Kelly said. “It felt like I was in Port Arthur. I’m not far from Port Arthur, so I love the players, the coaches, the staff, the campus. I’m just ready to get there and get to the next level.”

Morgan said Kelly’s signing came off of a concerted effort to change some of his habits.

“We told Evan, ‘Look if you want to be able to play college football and have an opportunity, you’ve got some talents and you were blessed with some unbelievable genetics, size wise, but you’ve got to do some things to take care of yourself, become a better athlete and lose a little bit of weight,’” Morgan said. “Evan bought in 100 percent, worked his butt off all summer, all fall, last spring. He changed his life in a lot of ways.” 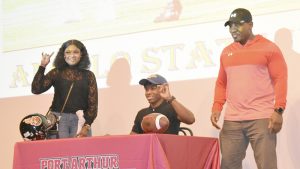 Neal is proud to be able to have the opportunity to attend Angelo State University.

“God blessed me to be in the position that I’m in,” he said. “I wanted to go to Angelo State, continue the legacy, continue the marathon of winning, and I also want to continue my academics.”

Morgan praised Neal’s incredible attitude and held him up as a role model for younger players.

“I wish I had 140 of this guy in my program,” he said. “This guy had this type of character, this type of work ethic, this type of coachablity, this type of leadership, and it’s a guy who we’re going to miss having around, started for three years here at corner. A great teammate, a great captain, there’s a lot of great things about this young man. I wish everybody in this room, the young guys, would take a piece of his character and what he put forward with the program for the last few years.” 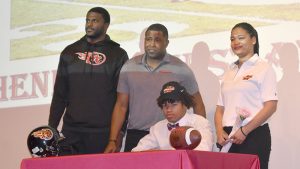 Cam Smith signs his letter of intent to play for Henderson State University.

Smith chose Henderson State University because it also welcomed him so well.

“I can’t wait to play,” he said. “I’m sure they’ll treat me like they treat all the other players. It felt good to visit, and I can’t wait to go down there and play. The first day I visited they made me feel like I was at home. I like the way that feels.”

“This guy was a huge team guy,” Smith said. “It wasn’t about this guy, it was about the team. He did whatever we asked him to do, probably didn’t touch the ball quite as much as he’d like all the time, but did everything we asked him to do. It paid off. He epitomizes the team-first mentality, and Cam did a great job of that. It’s something we can learn from, the young guys can learn from.”

All three will graduate with an associate of arts degree, Morgan said. Kelly will major in chemistry with the intent to become a forensic chemist. Neal wants to get his master’s degree in mechanical engineering, and Smith will also study engineering.

Kaila Jackson switched from playing guard to post when she reached high school, and it’s still an adjustment for the... read more