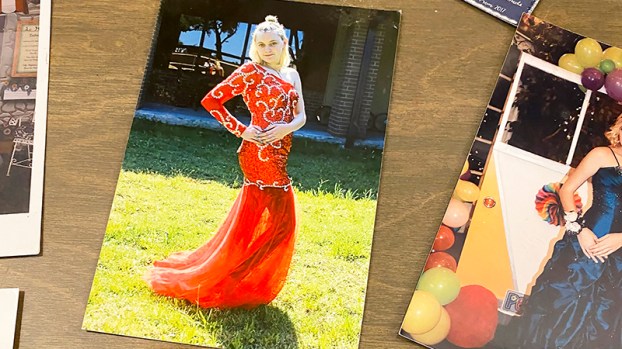 Photos of Heather, a high school student in the foster care system, during previous proms. A dress drive is ongoing to replace dresses lost to Imelda. (Courtesy photo)

Donate a prom dress for area children in foster care

NEDERLAND — A special group of girls are in need of a fairy godmother to make their Cinderella moment come true.

For the past 15 years, Child Protective Services have been collecting dresses and accessories for a prom for girls in the foster care system. But Tropical Storm Imelda flooded a storage unit where the dresses were being stored, destroying more than half of the dresses, mostly the long ones.

Shari Pulliam, spokesperson with the Texas Department of Family and Protective Services, is asking the community for help.

“Everybody has that dress in their closet they’ll never wear again. They bought it for one occasion,” Pulliam said. “We are asking for gently used or new prom dresses appropriate to wear to prom, costume jewelry, shoes, evening bags.”

Those who can’t make Friday special drop-off can do so from 8 a.m. to 5 p.m. Monday through Friday and 9 a.m. to noon on Saturday.

CPS puts on the prom, which is for girls in foster care in a 15-county area. It will be held Feb. 29 at the Courtyard Café in Groves. Approximately 30 girls are expected to attend.

Pulliam spoke of a girl named Heather, who will attend her fourth such prom. Heather told Pulliam at first she didn’t know what to expect, and then they transformed her into Cinderella.

“For that one night, she felt like a princess,” Pulliam said.

And that goes a long way in giving the girls confidence.

The Junior League of Beaumont is also working to collect prom dresses and helps fund some of the event. The boys aren’t left out. They get treated to Buffalo Wild Wings for lunch, then for a fresh hair cut at Sport Clips in Beaumont. Then it’s off to Ortiz Formalwear in Nederland, where they are outfitted at a “very minimal charge” and get to keep everything, as do the girls.

Tri-City Corvette Club brings the boys to the prom, where the girls will be outside waiting for them.

“They have a fun night of dancing and being a teenager,” Pulliam said. “Most of the time in CPS you don’t see results like this. It’s taking a child from an abusive or neglected situation and putting them in foster care, or a better place or with a relative.”

Pulliam started the prom night 15 years ago and said it is near and dear to her heart. She got involved when she learned there were children in foster care that didn’t go to their proms because they didn’t have the dress or other needed items. She started out with 50 dresses and that grew to 3,000 — more than half of those were lost in the flood.

Volunteers make the event run smoothly. Pulliam said there is a lady who makes the corsages and boutonnieres. There are people who do hair and makeup and help the girls “shop” for the perfect prom dress.

Barbara Phillips, manager of public relations at Valero in Port Arthur, said the company has an employee volunteer council, where employees bring ideas to the table. The projects go for a vote by employees — she can’t remember any idea ever being denied — and it goes from there.

Kristal McKay, operations timekeeper at Valero, is one of the people who help out — she’s the coordinator for the Valero volunteers.

McKay has helped collect prom dresses, accessories and more. So far they have collected 150 to 200 dresses through employees’ word of mouth.

“People are very eager to help out,” McKay said. “There are name brands, nice dresses, not just a closet cleanout.”

As a mom to five children, three of which are girls, McKay realizes how important the night will be and so do her daughters, who have also volunteered.

Phillips said some Valero male team members work with the boys, mentor them and encourage them to continue with their education.

PORT NECHES — “There are dreamers and there are achievers, but the difference between the two is action.” Port Neches-Groves... read more