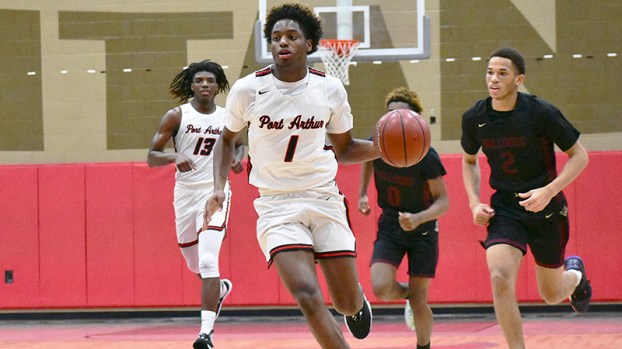 PLAYER OF THE WEEK: Memorial’s Amaree Abram is not your average sophomore

The point guard has grown up a lot since he joined varsity last season and is flourishing in his role leading the Titans on the court.

“He’s just running the team well,” Lewis said. “He finds the spots to score. He’s finding his teammates. He’s just doing a really good job being that point guard for our type of team, and it’s just a tremendous leap and bound from what he was last year.”

As a freshman playing among a team full of seniors, some adjustment was required for The Port Arthur News Boys Player of the Week, Abram said, and it required experience.

“I learned a lot,” he said. “At first I was kind of holding myself back instead of playing. I was 14 playing with grown men, so I had to adjust and open up and play my game. I just got used to playing against these guys every day, going against each other, competing and I got into the game and started playing my game and expanding.”

Now the starting point guard, Abram scored 13 points for the Titans in Friday’s 62-37 win over Vidor at home.

“He’s been playing well, playing at a very high level,” Lewis said. “He’s growing up right before your eyes. I remember last year he was a freshman, getting good minutes, playing OK but he’s completely turned around. He’s playing good basketball. He grew up totally.”

Even as a sophomore, Abram is working on being a team leader and being more vocal, as it’s his role to get his team going, he says.

“I get them in sets. Like if we need a bucket, I can get a bucket or I can call a set,” Abram said. “We have many options.”

Lewis said Abram continues to work on his game each day but could probably be more vocal.

“He’s only a sophomore, so sometimes it’s hard for seniors to listen to a sophomore, but he’s not an ordinary sophomore,” Lewis said.

Abram will also play baseball as an outfielder/first baseman. Abram says he loves both sports, though he favors basketball a little.

The mental aspects of baseball, though different from basketball, have helped on the court.

“Baseball helps me stay mentally locked in,” he said. “During baseball we do a lot of running, which helps me with my conditioning and keeps me in shape.”

As the Titans prepare to travel to PNG for their second meeting this season at 7 p.m. today, Abram says Memorial still needs to make adjustments on offense to get in better playing shape.

“We’ve just got to play together and fix the pieces that we need to fix, and we’ll be straight trying to get the state title,” he said. “We’re a defensive team, we’re going to get stops. We just need offense. We just need to put the right guys in place, fix some of the offense and adjust to the defense.”

The next time Port Arthur Memorial and Beaumont United face off in football, the stakes will be higher than just... read more