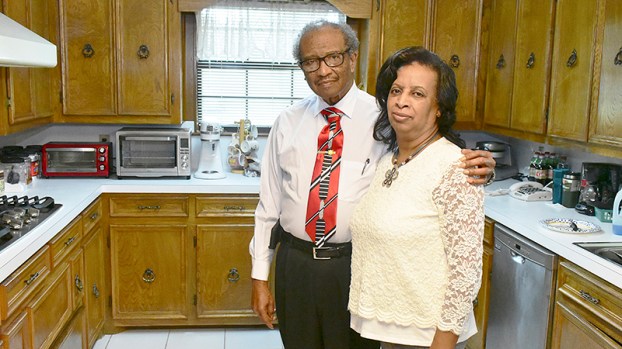 If Artemus Hancock doesn’t have to pay Port Arthur city hall a visit after another major storm to ask about fixing the sewers, he’ll be happy.

“I was here three years before Harvey, and I never had a problem,” he said of his residence, located just to the west of Memorial Boulevard and south of Texas Highway 73. “In fact, I replaced the sewer line before I moved in here. When Harvey came, we had flooding.”

That was the beginning of Hancock’s sewage troubles.

Up to 2½ feet of flood water rose inside the home when Harvey arrived in 2017, three years after he and his wife Mertha moved there. When they returned, Mr. Hancock discovered “black stuff” around the base of the commodes and in the tubs.

That meant only one thing: “… Water had backed up into the house from the sewer line, not just the flooding coming in,” he said.

“But this time, we didn’t have 2 feet of water,” Hancock, 82, said. “We didn’t have any flooding in Port Arthur. There was a lot of rain. When I called them out, that’s when they told me the clay pipes they still have underneath the city in most places, especially in the older parts of the city, are crumbling and cracking and the pressures from the [storm] made it worse. So now, you have that water in the sewer lines. Imelda came and dumped all this water, and that caused the sewer to back up.”

The resulting smell bothered Mrs. Hancock, who has asthma. “It was too much,” she said.

Mr. Hancock, a retired band director in the Port Arthur Independent School District and 51-year resident of the city, spoke to the Port Arthur City Council last week about his sewage troubles, and Councilwoman Charlotte Moses assured him “a change is coming” in the infrastructure.

Donnie Stanton, the city’s interim director of utility operations, is aware of sewage issues in the Hancock household and said his department is staying on top of them.

“A lot of the lines are failing,” Stanton said. “My quest is to gather flow data, and we’re going to have a more concerted area to find the areas that are really bad.”

Stanton confirmed a concern Hancock had about the aging of the pipes, adding some of them are 100 years old. Stanton added a capital improvement plan is in place for the city that calls for a long-term strategy that he says is still developing.

“There are lots of moving pieces because we want to correct the problems that aren’t flowing before it becomes an area-wide problem,” he said. “Up until recently, it’s taken a significant amount of resources.”

More than $1.7 million goes from the city’s water and sewer fund goes into the capital improvement fund.

Stanton added the city is improving pipes to prevent any more backflow. A majority of them since 2000 have been replaced, but he cautioned there’s plenty more work to do.

“In 2009, there was a big program that saw the change in a good amount of our gravity flowlines to new pipes,” Stanton said. “My team and I met [Thursday] morning. We’re having a planned effort that includes a manual survey of the area and a sampler to determine where the grease generators are.”

Hancock asked the city council to place sewage improvements on its budget for the 2021 fiscal year.

“The bad thing about it is, it’ll rain today, start backing up tomorrow and it may continue for several days thereafter to back up,” he said. “It continues to flow to the treatment plant because there are problems in the lines. It doesn’t leave like it’s supposed to and go to the treatment plant.”

Meanwhile, Stanton assures he and his team are a step ahead.

“We are proactive in that area before it rains, after it rains, during it rains,” Stanton said.