Soot and smoke damage can be seen at this apartment unit at 1834 Gulfway Drive where 74-year-old James Griffin died on Saturday. (Mary Meaux/The News)

The investigation continues into a fatal apartment fire that took the life of a 74-year-old Port Arthur man on Saturday.

Three adults, ages 27, 29 and 74, were in the apartment as well as a small child, Port Arthur Fire Marshal Paul Washburn said of the fire that happened at approximately 12:04 a.m. Saturday at the eight-unit apartment building at 1834 Gulfway Drive. Two adults and the child were able to escape the fire but the 74-year-old, identified as James Griffin, was trapped in the apartment.

Firefighters removed Griffin from the apartment and Acadian Ambulance Service took him to the Medical Center of Southeast Texas. He did not survive his injuries, according to information from the PAFD.

Jefferson County Pct. 7 Justice of the Peace Brad Burnett said the cause of death is pending toxicology, investigation report and medical record review. 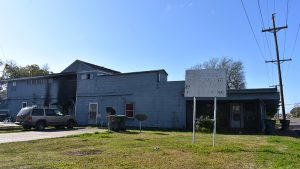 James Griffin, 74, died in an apartment fire at 1834 Gulfway Drive in Port Arthur. Two other adults and a child were able to escape.

The doorway to the apartment was open on Monday morning and the remnants of a screen door and what appeared to be a wooden kitchen chair were laid near the entrance. Black Soot from the fire marked the inside of the apartment as well as the awning and up the blue-grey exterior to a second floor. A small window air conditioning unit is to the left of the doorway and soot could be seen on the window seal around and above the AC.

Washburn said there is no indication the fire was purposely set and investigators still need to talk with the apartment residents.

Fifteen firefighters along with one battalion chief and two fire marshals responded to the scene. There were no firefighter injuries.

Other fatal fires in Port Arthur

The last fire fatality occurred July 4, 2018, when three siblings; Jayden Pollard, 12, Brayden Handy, 6, and Brooklyn McCray, 2, perished in a fire at Arthur Square Apartments. Their cause of death was smoke inhalation.

Background information showed that following Hurricane Harvey, which severely damaged the complex, that the complex housed residents on the second floor while it was renovating other units nearby. The children were staying with their mother in an upstairs apartment while apartments on either side were being repaired.

On the night of the fire, the mother brought one of her children to the hospital because the child was sick and brought along two of her other five children, leaving the remaining children.

Washburn said there are a number of ways for firefighters to deal with death. The city offers an Employee Assistance Program, there is a fire department chaplain and there are members who can listen.

Washburn said investigators are working on two previous fires that occurred in the city at vacant houses.

Two men were seen in the area when the fire began but so far PAFD has been unable to identify the men. It is also unknown if the fire was intentionally set.

Witnesses said three men were seen leaving the building before the fire but they have not been identified. It is also unknown if that fire was intentionally set.

The next time Port Arthur Memorial and Beaumont United face off in football, the stakes will be higher than just... read more