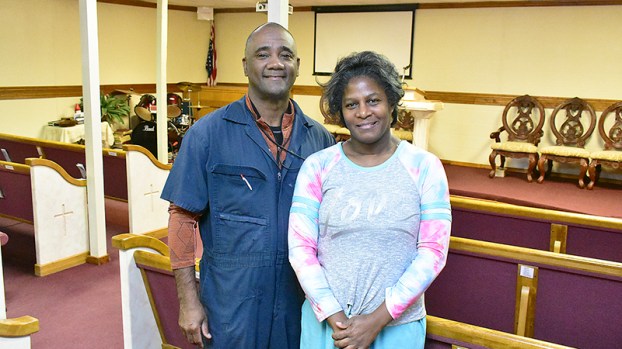 Pastor Randy Williams stands with his wife, Enetta, inside Port Arthur Apostolic Church of Jesus Christ, which has been in operation for 15 years. (I.C. Murrell/The News) 1-23-20

Randy Williams often heard in other churches a prophecy that he would become a pastor.

“At the time, I didn’t see it, but I knew as I stayed faithful in church as the years went out, I started feeling the call,” he said. “I guess other pastors can see it by the faithfulness of a member, and I was one of the members who was real faithful. When I was a deacon and they needed me to do anything in the church, I would do it because I was one of the faithful members.

“Through praying, fasting and asking God for what direction to take, he led me in the direction to start a church.”

That led Williams, now 52, and his wife Enetta to establish Port Arthur Apostolic Church of Jesus Christ in 2005. The church recently celebrated its 15th anniversary.

The church, located at 2600 Rev. Dr. Ransom Howard Drive, is the site of the former Stevenson’s Grocery. Enetta Williams remembers the time her husband asked the building’s owner about purchasing the building.

“He kept looking at this building years ago,” she said. “[The owner] stayed in the house back here. He knocked on her door one day and asked her if she would want to sell the building. She said no. She said, ‘Look to me in the future. I might sell it.’

“He knocked again at the door, and he had seen somebody cleaning out the house next door. He stopped again and asked the man, and he said, ‘Yes, we sure are selling the building.’”

Establishing a church was the answer to Pastor Williams’ prayers.

He first moved to Port Arthur from his native Abbeville, La., when he was either 8 or 9 years old. His mother married a man from Abbeville who had a relative in Port Arthur.

After leaving school in 10th grade, Williams started working in Lafayette but moved back to Port Arthur and met his wife. The couple has been married since Feb. 27, 1988.

“When I came back here and me and my wife got together, I went back to school because I felt if I was going to preach, I needed to be able to tell the saints that I got a high school diploma,” said Pastor Williams, who works at the Port of Port Arthur. “When I started working and got to liking the work, when I came back here and got in church here at Bro. [B.H.] McCoy’s church, the Lord called me to the ministry and I felt led to go back to school.”

By his late 30s, Williams earned his full diploma at a private school.

Today, the Williamses are parents of two adult children, and Port Arthur Apostolic Church of Jesus Christ is home to approximately 30 members … “and growing,” the pastor said. The church will host a Pastor and First Lady Appreciation Service Feb. 21-23, with worship starting at 7 p.m. the first two nights and at 11 a.m. that Sunday morning.

“To commemorate the church anniversary is basically thanking God for groundbreaking and for what we did here,” Pastor Williams said. “This program is to show appreciation to the pastor and family, being married and taking care of his family and taking care of them as a church.”