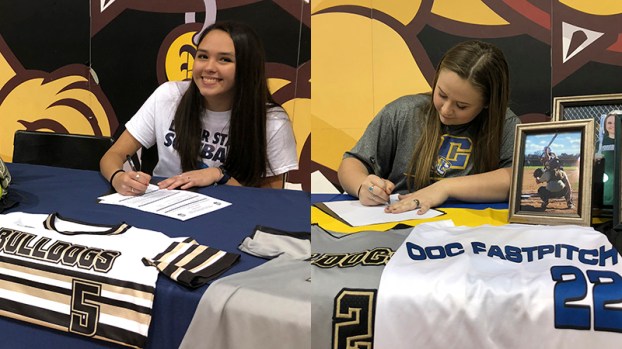 Coach Will Mallette said Wednesday was a scary day for him because it felt like the beginning of the end.

Two of his seniors who have been with the Nederland softball program for four years signed their letters of intent to play at the college level.

“I kind of get attached to my players, and next year they’re not going to be here,” Mallette said. “It just bothers me a little bit, but this is a celebration. Both of these ladies are amazing people.”

Those ladies are outfielder and pitcher Chaelyn Esquivel, who signed to play for Lamar State College Port Arthur in the fall, and catcher Shelby Schexnayder, who signed with Central Christian College in McPherson, Kansas.

“I’m excited, a little bit nervous,” Schexnayder said. “I’m moving so far away and not having friends and family around, but I feel like it’s going to be good.”

Mallette praised the value both players exhibit as the kinds of players coaches love to have on their teams.

“You don’t have to try to pull extra out of them,” he said. “They’re giving it all already. They make the place a great environment. They’re both a lot of fun, they really are.”

Schexnayder and Esquivel are looking forward to playing softball in new places.

Schexnayder chose Central Christian hoping to feel like she has a family there while she’s so far from her own.

“It’s a small private college and it’s in a small town,” she said. “The team’s very close knit. It’s like a family environment so I really admire that.”

Also a powerlifter with ambitions of making it to state competition this year, Schexnayder will continue to work out and take private lessons over the summer in preparation for her first fall semester.

“Shelby is a kid that’s a work horse,” Mallette said. “We don’t have a catcher going into the season but there’s a good chance it could be her. Her hitting has a ton of power, and she’s one of those people that wants to show up and work every single day.”

Esquivel loves the coaches at Lamar State and is looking forward to continuing to be close to her family and friends in the area. She, too, will spend the summer working out and playing travel ball, since she expects college level softball will be challenging.

“I expect it to be a little more high-tempo than what we’re playing now, and probably a lot more fun I’m assuming because I’ll be with different people experiencing different things and going to other places to play than just local,” Esquivel said.

“I’ve watched her play other sports and she is at home on a softball field,” Mallette said. “She’s just an incredible worker, a positive attitude, a great teammate. I expect her to have a standout year, hitting and outfield-wise.

“There’s not much we ask them to do that they haven’t done and won’t do. They represent the program extremely well, and I’m super excited they get a chance to keep playing past high school. Ladies, I’m proud of y’all.”

PORT NECHES — It was rough for Brittany Brevell when she joined the Port Neches-Groves varsity basketball team in her... read more