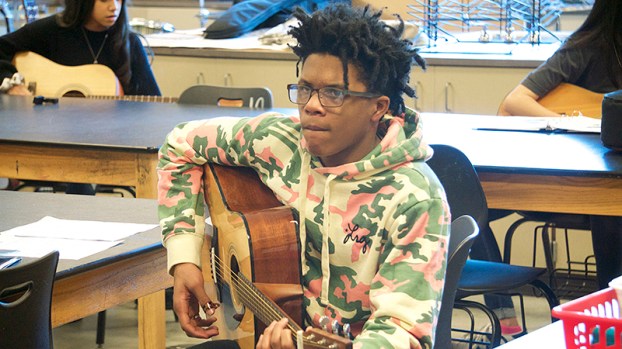 PORT NECHES — Port Neches Middle School’s newest strings class has been hard at work since the beginning of the fall semester.

Mark Nesmith and the Warriors debuted their first song, “Peace, Love and Indians,” at the middle school’s formal winter concert in December. The song, which is written and produced by Nesmith and the students, has officially been released on ITunes, Spotify and Google Play.

Hard copies are also available for purchase for $5 at Port Neches Middle School.

“The strings class is going fantastic,” principal Kyle Hooper said. “I’m really proud of the class and the progress they’ve made. They are farther along than I thought they would be at this point in the semester, and the CD itself is wonderful. We are excited about the fact that we have so many people that wanted to help us get in on it.” 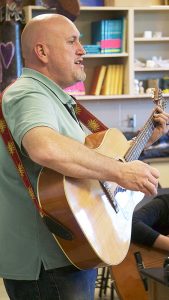 One hundred and forty students from the middle school choir contributed to the song, along with the beginner strings class ranging from sixth to eighth grade students using guitars, drums and pianos.

Hooper said he loves the song because of its grasp on true Indian spirit, and the importance of peace and love.

“The song really relates to the hometown feel of our place and our traditions,” he said. “The music is also a mix of Americana and Texas country music. It’s really cool.”

Hooper said the strings program started last semester as a way to expand upon the band, choir and fine arts program.

“We were looking for a way to expand, and I thought guitar would be really cool because we’ve had students in years past be interested in it,” he said. “We just got the right guy to do it. Nesmith is excellent in the stuff that he does, so it was a great opportunity, right timing and the right person.” 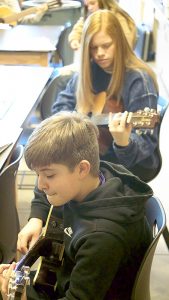 “Last year, when we started the class, we had zero instruments and only 10 to 15 kids,” he said. “Up until this point, it’s been all about donations from music friends and teachers. So by selling the CD, we are hoping to get more donations for the program and be able to buy more instruments.”

Nesmith, who is a local staple in Mid- and South County as a known musician, said the strings class is like his own little personal “School of Rock.”

“Most of the students who started here, very few had any guitar or strings knowledge,” he said. “Now, we have students who can work guitar, some drums and piano.”

The class is working on their next release. For more information, visit https://www.pngisd.org/Domain/345.

To make a donation or purchase a CD, contact Nesmith at mnesmith@pngisd.org or Kyle Hooper at khooper@pngisd.org.