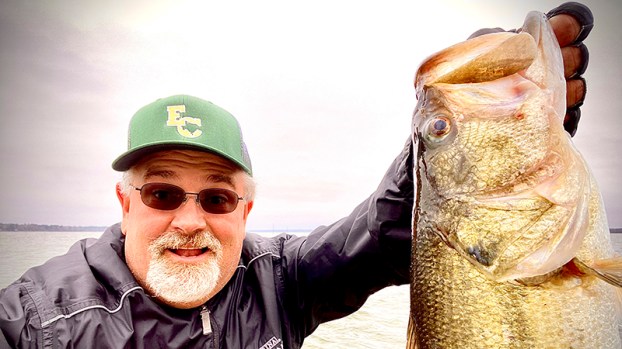 I caught this one while prefishing and I thought the boys would catch more just like her. She’s not as big as she looks in the picture but five just like her would win almost any tournament on any lake. (Brian Johnson/Special to The News)

While many of my friends have been involved in bass fishing tournaments for years, I never have — that is, until this past weekend. This was not a typical fishing tournament. Rather I was the captain of my son’s high school bass fishing team. This meant that I would be guiding my son and his friend but not really fishing myself. To say that things did not go as I planned would be an understatement. However, we had a great time and we also learned several things that will help us to do better in the future. We are rookies, but I feel that improvements are on the horizon.

Before fishing this tournament, the boys and I had a game plan that I thought was rather simple and foolproof. We would prefish on Friday, find the fish, and go back and catch them on Saturday. It sounded like a good plan to me but it did not exactly work out that way.

The first flaw in our plan was that the boys had six-week exams on Friday, which meant that they would not be fishing with me. No problem. I would grab a fishing buddy and we would go find the fish ourselves. The good news is that we actually found some fish in deep water as well as shallow water and were able to put together what I thought was a good strategy. We would start off in the deeper water and catch what we thought were the bigger fish. If that didn’t work, we would head to the shallows and pound the cuts and drains to pick up a limit before our cutoff time of 2 p.m.

The next problem with our plan was that we didn’t plan for how the weather change would affect our fish. Friday night as we slept, a storm blew in ahead of a cold front that dumped several inches of rain while we slept. Cooler weather blew in during the day on Saturday while we fished. Anyone who fishes much knows that when the weather changes, so does the fishing. It can have multiple affects. One affect is to cause the fish to stop biting. This is what happened at our spots.

With no other strategy in mind, we stuck to our game plan but the fish did not cooperate. Even though we could see them on the graph, they still didn’t bite. Being convinced that our spot held numerous big fish like I had caught the day before, we spent hours fishing in an area without getting any bites. Once we decided to move to a different area and fish our shallow water option, time was running out. When we got to the shallow water spots, they were extra muddy from the rain, which made them ineffective as well. By the time 2 p.m. rolled around, we only had one keeper bass. This was not what I had expected and I had no one to blame but myself. The boys did everything I asked them to do and they fished hard. They never stopped casting, and never complained. As the captain, I felt like I had let them down. I did what I thought was best and it didn’t work. Sometimes these things happen.

After spending a few days thinking about it, I asked myself what I could have done differently. I came up with a few things that I am certain will help in the future and might help you on your next trip.

Unfortunately, I have just about reached my word limit for this article and I am reaching the print deadline so you will have to tune in next week for the lessons I learned and the how-to tips that will improve your success. After all, as a tournament fisherman, I can’t give away all of my tips at once. I encourage you to join me next week. Until then, may God bless you and your family.

Andrew Landry took all his fans in Mid-County on an agonizing thrill ride Sunday afternoon before closing out his second... read more