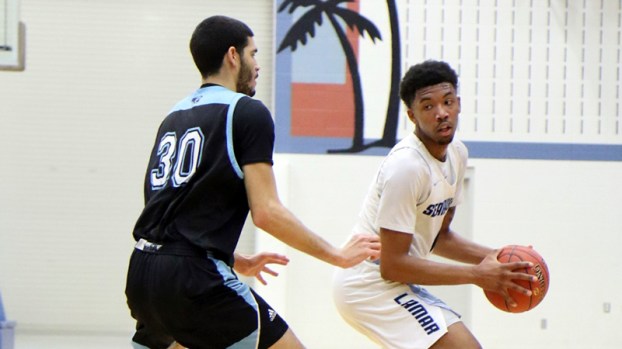 Over the summer Devaughn Thomas attended the JUCOAdvocate Top 45 camp at Eastern Florida State College, where 45 of the best junior college basketball players came for valuable exposure before coaches from four-year colleges.

“That was probably one the best camps I’ve ever been to,” Thomas said. “It was a great camp, a lot of great talent, and every D-I coach you can think of was there. It was a great experience. It was tough — everybody there was elite, so you had to bring your best every time you played on the court.”

Thomas came back from the camp for his sophomore year at Lamar State College Port Arthur with what he learned at the camp about what he could improve about his game.

That work this season has landed him among a ranking of the top 100 junior college players in the country. JUCORecruiting.com ranked Thomas 82nd out of the 100 best basketball players in junior college earlier this week.

“It’s nice that my hard work gets recognized, nationally of course,” Thomas said. “That’s really a blessing to see that it gets recognized. But it’s only up from here, and you’ve got to keep working and keeping pushing to be better.”

“There’s a lot of good players that were listed on that list and Devaughn’s had a good sophomore year for us,” Madison said. “He’s been productive on the court and he’s done well for us. He’s been getting interest from four-year schools. He’s worked hard since he’s been here and he’s having success.”

Madison says what makes Thomas more recruitable is his versatility on the court.

“He’s got good size on him, good length good athlete, still rolling,” Madison said. “He’s got some perimeter skills to where he can put the ball on the floor, he can shoot from the perimeter and he’s long enough and big enough he can score down on the block, so his versatility and his skillset is intriguing to four year schools.

Much of his basketball prowess stems from a strong work, ethic, Thomas said, which is something that also extends to his academics. As he says, Thomas is a “student athlete,” and “student” comes before athlete.

“School is very important,” he said “I was raised that way. My mom made sure I stayed on top of my grades and that carried over to college. It’s pretty tough, but I chose to do this, so I have to learn how to manage it.”

Thomas is studying kinesiology for work in physical therapy, athletic training, or as a coach.

“I just want to stay around the game of basketball any way I can,” he said.

His academics have even gotten the notice of some Ivy League schools, Madison said. Not every program values things like academics evenly, but Madison said good grades can show a school that a prospective student has a good head on their shoulders and will be more likely to make good decisions off the court and keep priorities straight.

“Each program’s got their own philosophy,” Madison said. “I think coaches like to get guys who do well in the classroom. Usually if you do well in the classroom you’ve got daily discipline.”
“It’s all about your work ethic, hard work, and what you do on the court and the classroom for sure, that determines you getting noticed,” Thomas said. “A great GPA, great person overall, good work ethic, not lazy, coachable for sure, you’ve got to be a hard worker that always wants to learn and get better.”

Madison and assistant coach Casey Apetrei do their part to boost their player’s exposure as well.

“We try to market them as much as we can,” Madison said. “Casey does a good job with social media, getting their names out there and we get them as much exposure as we can. That’s a part of our process too. We try to play in as many elite jamborees to give them exposure to four-year schools. We try to get them invites to the elite camps in the summertime and we’ve had success with players playing in the summer, that’s helped them out.”

Thomas is looking at colleges he’d like to attend after Lamar State, but for now his focus is on his present challenges: School and the Seahawks.

“I have a few schools in mind but right now I’m focusing on this season for me and my team for us to end on a win for sure,” he said.

What a difference one week has made on the PGA Tour for Andrew Landry. Seven days after he badly missed... read more