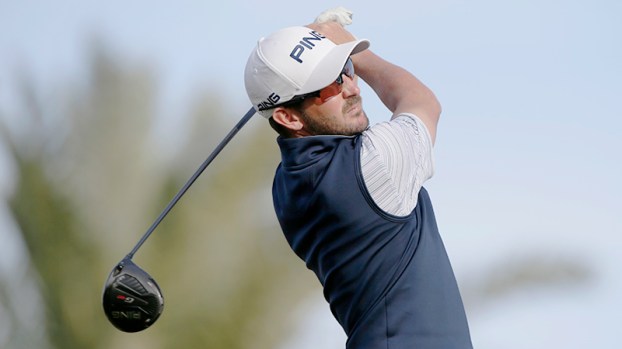 Andrew Landry follows through on a shot from the ninth tee during the third round of The American Express golf tournament on the Nicklaus Tournament Course at PGA West in La Quinta, Calif. (AP Photo/Alex Gallardo) 1-18-20

Landry leads in La Quinta, one round away from second career win

If Andrew Landry is able to finish off his second PGA Tour victory Sunday in the American Express Championship in La Quinta, California, he’ll no doubt look back to a clutch par putt on the final hole Saturday as one of the week’s biggest momentum moments

Landry, who came out smoking in round three on the Nicklaus Tournament course, led most of the day but was staggering at the end. Then he calmly rolled in an uphill, 18-foot par putt to finish off a seven-under-par 65 that salvaged a share of the lead with Scottie Scheffler.

Prior to the scrambling par at the end, Landry had made only his second bogey of the week after dumping his ball in the bunker on the previous hole, a par 3. To finish bogey-bogey and fall out of the lead, after passing Scheffler and Rickie Fowler with a blazing start, could have been demoralizing.

“Good putting,” said Landry, when asked to explain his position atop the leaderboard after missing the cut with rounds of 76-77 last week at the Sony Open in Hawaii. “I have been putting the ball absolutely beautifully.

“Really, just kind of everything has been there. My wedge play has been there. I went to a 54 degree this week, instead of playing with a 52 and 60. It’s kind of given me that 105 to 115 yardage number into the green. The wedges are there, the putting is there, I just need to go out and do it again tomorrow.”

The Port Neches-Groves ex has been so deadly with his putter he leads the field in birdies (23) and is No. 1 in putts per greens hit in regulation. He’s also No. 9 in strokes gained putting.

Dr. Johnny Brown was raised at a location in Austin where the University of Texas’ UFCU Disch-Falk Baseball Field is... read more