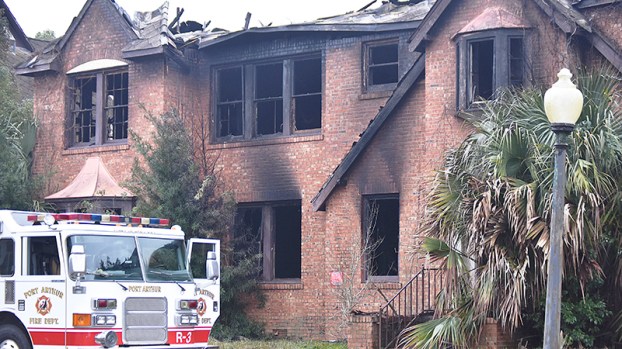 The Port Arthur Fire Department continues to investigate a fire that destroyed an apartment building at the historic Eddingston Court.

Fire Marshal Paul Washburn said they are trying to find out the identity of the people seen leaving the scene Tuesday before the fire.

Witnesses said three males were seen leaving the building located in the 3300 block of Procter Street. Authorities said they believe the males were white, though one could have been Hispanic. They were wearing white T-shirts and blue jeans and looked to be in their early- to mid-20s. 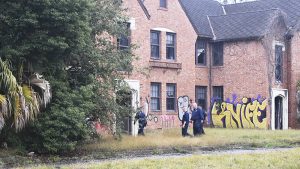 Officials with Port Arthur fire Department enter an apartment building across from one that was severely damaged by fire earlier this week. (Mary Meaux/The News)

Fire department personnel were seen the next day at the site, which includes two apartment buildings and two houses — all of which have been vacant for decades.

The Port Arthur News left several messages with the owner of the property but the calls were not returned by deadline Friday.

The fire occurred midday Tuesday and forced officials to barricade a portion of Procter Street and nearby roads while firefighters battled the blaze.

The roof appeared caved in from the fire and soot covered areas around the windows, painting the red brick a hazy black color. 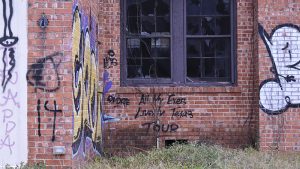 Graffiti and broken windows at an apartment building across from one that was severely damaged by fire earlier this week. (Mary Meaux/The News)

Firefighters earlier this week walked the grounds, entering all of the structures, many of which had graffiti and busted out windows.

Eddingston Court was once the focus of postcards and a focal point along Procter Street for its conch shell fence created from 6,000 conch shells imported from the Cayman Islands by then owner and tugboat captain Ambrose Eddingston for construction of the shell wall.

Eddingston Court was listed in the National Register of Historic Places in 2004.

Anyone who can identify the individuals seen leaving the apartment is asked to call the fire investigation hotline at 409-983-8715. The caller may be eligible for a cash reward if the persons are identified. 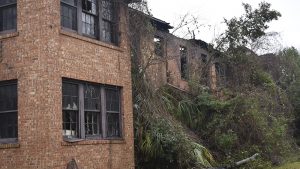 Fire damage, broken windows and overgrown vegetation can be seen at the rear of the apartment building that was heavily damaged by fire on Tuesday. (Mary Meaux/The News)