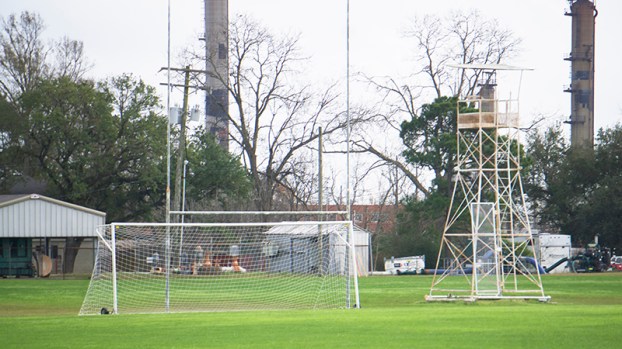 Port Neches-Groves Independent School District is receiving funds from an approved TransCanada Pipeline installation to improve the band and soccer field located next to the high school. (Cassandra Jenkins/The News)

PNGISD Superintendent Mike Gonzalez said the district is using funding from an approved TransCanada Pipeline installation to make updates to a field used by band and soccer students next to the high school.

“We also have peewee football that uses that area and some other teams that compete there, so we want to make some improvement to it,” he said.

Gonzalez said the funds, which total a little more than $100,000, will be used to fix the fencing around the field, improve parking lots and widen walkways.

“We want to use the money to improve an area that is heavily used among our students,” he said, adding officials are looking at upgrading bathrooms that can be utilized by those on the practice fields or tennis courts.

Gonzalez is also hoping to purchase a new drum major tower for the Indian Band.

The tower the band is using has been in place for many years.

It’s safe and sturdy, but needs to be updated, Gonzalez said.

“We want to make updates for the entire facility and not just for our athletic teams,” he said. “Our fine arts programs deserve those updates, too. The band is a large part of what we do here at PNG, and we are very proud of them so we want to do things like that for them and improve their department as well.”

“I know the man who built our band tower,” he said. “He is a good friend of mine and in his late 50s right now. He built (the tower) originally as an Eagle Scout project when he was 18. So it’s been around a long time and has several coats of paint.

“It’s served us well, but I’m thankful to be having another updated one. The fact that the district wants to help out the band department, I was floored. It’s wonderful.”

Gonzalez said he welcomes the extra money to pay for these improvements, which were already on the docket for enhancement.

“The extra money just allows us to make the necessary improvements without dipping into the district funds,” he said. “It was something we were going to do anyway but now we can begin to make even more improvements for our students.”

Construction and updates are set to begin in early summer with the finished product available before the start of the 2020-2021 school year.

“The district is excited to use these funds to make improvements that need to be made,” Gonzalez said. “We are excited for the update.”